Dreaming of another Diva

By The Owner Breeder staff 08 September 2011

Tugela, the Juddmonte-bred daughter of Riverman, ran just twice for Khalid Abdullah in 1997, never troubling the judge. Bought by the CBA later that year for 21,000gns at Tattersalls’ December Sales, she would return to the same ring a year later, consigned by Ballylinch Stud and carrying a Desert King foal.

Australian bloodstock agent John Foote went to 60,000gns for the three-year-old mare, who, on March 21, 1999, foaled a filly who would go on to become an Australian legend after being shipped down under alongside her mother.

Makybe Diva may carry a British suffix but she is an Australian champion through and through. The only horse ever to have won three Melbourne Cups – in 2003, 2004 and 2005 – she also won another 12 of her 36 lifetime starts, including the Cox Plate, Sydney Cup, Australian Cup and the BMW Classic.

This southern hemisphere breeding season, Tugela is set to return to the now 17-year-old Desert King, winner of the Irish 2,000 Guineas and Irish Derby who is now a permanent resident at Bombora Downs Stud on Victoria’s Mornington Peninsula, alongside former National Stud resident Golden Snake.

Owner Tony Santic, who named his Makybe farm near Geelong after Tugela’s champion daughter, said: “We have always intended on returning Tugela to Desert King and given they are both currently in Victoria now’s the perfect time. A full brother or sister to the Diva running around will be exciting and something to look forward to.”

As well as breeding Makybe Diva, Santic’s Emily Krstina (Australia) Pty Ltd banner is also responsible for the top-class dual-hemispshere sprinter Starspangledbanner, winner of the Golden Jubilee Stakes and July Cup during his British foray in 2010.

The son of Choisir, who shuttles between Ireland and Australia for Coolmore and has just embarked on his first southern hemisphere covering season, has been selected as the mate for Makybe Diva this year. She currently has her fourth foal at foot, a colt by Australian champion sire Lonhro. 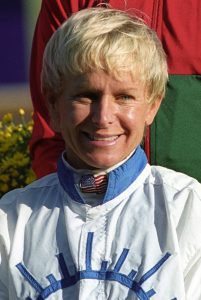 Up Next
Beating the boys, American-style