'I just love the sport, love the thrill and love the people'
Stories

Despite a solid start, the store market looks unlikely to escape the ramifications of Covid-19

Amid the horse-trading hopscotch of recent months, no sector has needed to be lighter on its feet than that involved in trading unbroken jumpers, aka store horses.

When Covid-19 hit Europe and lockdown took place, store vendors not only faced a future without auctions at which to sell stock, they also recognised many of their core customers – the pinhookers who had bought their horses the previous year – had been left with horses they had been unable to race and resell in the spring. Racing and point- to-pointing had shut down in March, leaving numerous four- and five-year- olds in unraced limbo. Those who had raced were suddenly deprived of auction opportunities.

The problem had been compounded by winter months of above-average rainfall resulting in heavy ground, but just as the courses began to dry out, the racing dried up.

On that note, one point-to-point handler, Sean Doyle of Monbeg Stables in County Wexford, saw a silver lining in the lockdown cloud. “I believe we dodged a bullet,” he said, “because the firm ground that prevailed through April and May would have made it very difficult to run horses.”

On top of the on-off possibilities of staging sales came variables relating to travel advice given by the governments in Westminster and Dublin. From July 4, Britain relaxed restrictions on visitors from Ireland, but the Irish government held onto its stance of a 14-day isolation period for people entering Ireland. That was inconvenient for traders living in Ireland who wanted to attend British sales, but extremely challenging for vendors, agents and racehorse owners based in Britain who hoped to cross the Irish Sea.

Irish folk who attended sales at Newmarket and Doncaster in July accepted they would have to isolate once they returned home, but since most lived on farms and could continue working with horses, they were sanguine about the prospect – by contrast, staying in an Irish hotel room for two weeks was not that appealing to traders based in Britain.

Sales disruption had been running for months, dating back to the loss of four key sales of jumping horses – Tattersalls’ Cheltenham auctions in April and May, Goffs UK’s Aintree Sale and Goffs’ Punchestown Sale – plus Tattersalls Ascot’s June and July Sales. Goffs UK’s Spring Sale at Doncaster was postponed twice and then rebranded the Summer Sale to reflect its eventual staging at the end of July.

There had been some respite from the gloom with the resumption in Britain on July 1 of racing over jumps, but the point-to-point season on both sides of the Irish Sea had long been consigned to history. Point-to-pointing authorities are planning an earlier-than-normal start to next season – September in Ireland and October in Britain – in a bid to help owners and trainers of horses who failed to get a run in the spring, but that gave little succour to store vendors.

Into the mix came a hastily-arranged Monday afternoon session of selling at Doncaster in late July involving a catalogue of 65 horses (55 offered), the bulk of whom were originally destined to cross the Irish Sea from Britain for Tattersalls Ireland’s Derby Sale and Goffs’ Land Rover Sale, the twin peaks of store-horse auctions. Those two auctions were set to go ahead in August, but with little British participation unless the Irish government relaxed its rules.

The Monday sale in Doncaster, held on the eve of Goffs UK’s Summer Stores Sale (which was supposed to be the Spring Sale held in May) was not ideal, but there was general praise for Goffs and Tattersalls in working together to stage the event, and a palpable sense of relief that horses were finally being moved on. However, buyers, fearful of a long-term downturn in the economy, were cautious.

Chris Barber, who buys stores, races them as pointers from his Dorset base and then resells, said: “The plan at the start of the year was to buy ten stores during 2020, but it is more likely to be four or five now. We fear there will be a reduction in the number of buyers [next year], so we would rather purchase fewer stores now, but we are prepared to spend a bit more on them.”

Barber was left with seven unraced four-year-olds in the spring, but managed to sell three privately, an essential move to help his business’s cash flow. The other four will be raced in the autumn, Covid willing.

Pinhookers Charlie Poste and Fran Nimmo, who are based in Warwickshire, have 15 four- and five-year-olds still in their stable, of which ten are unraced. He is pleased there will be an earlier resumption of pointing in Britain, but said: “We might have bought 12 stores this year, but at present it is likely to be five maximum. That is not set in stone, and if people want to get involved we might buy six or seven.”

With investment in stables and gallops at their yard Poste has to be positive, and said: “We are not risk averse, and we put our own money into these horses, but we have to be sensible.” 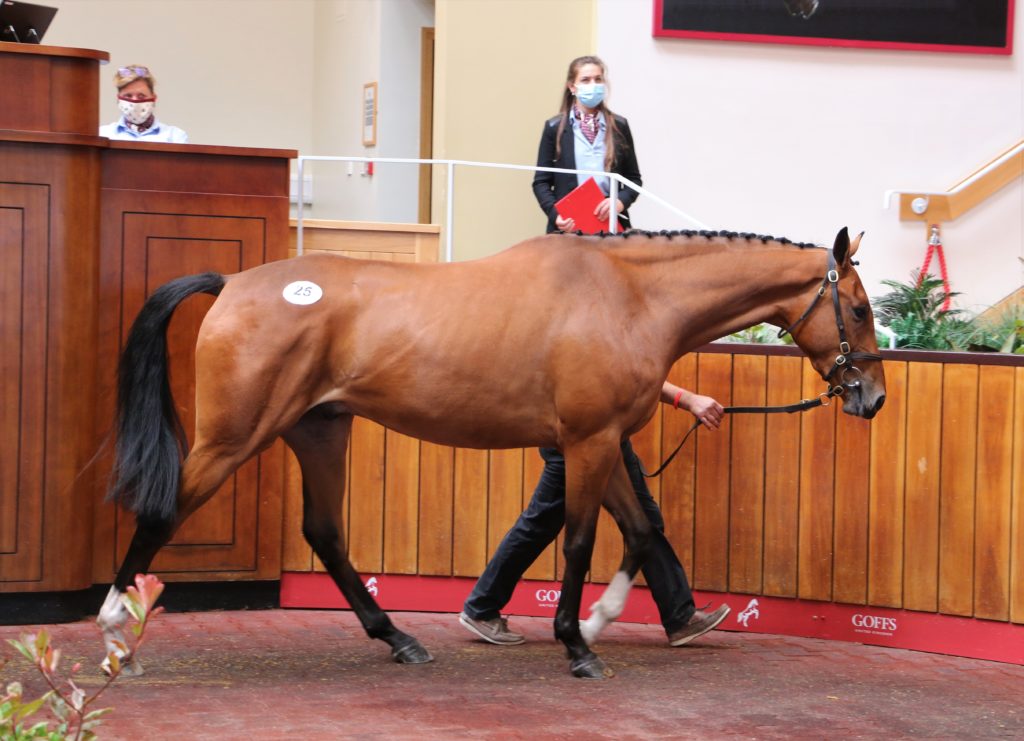 A son of Soldier Of Fortune was a highlight of the Goffs UK Spring Store Sale at £80,000 –π Photo: Goffs UK

Store vendor Robert Chugg of Little Lodge Stud said: “I’m grateful for the work put in by the sales companies, but a Monday afternoon session in Doncaster is not the same as the second day at Fairyhouse.

“In 2008 [after the bank crash] a number of store buyers became cautious about spending money on horses when they were laying off staff, and I suspect it will be the same this time. However, the top ten per cent of horses will always find a buyer. It will be horses in the £25,000 to £40,000 bracket that will probably struggle to sell.”

Cheshire-based Richard Aston hoped to sell horses at the Derby and Land Rover Sales in Ireland under his Goldford Stud banner, but they were rerouted to Doncaster and the hastily-created Monday session. Goldford also offered seven the following day in Goffs UK’s Summer Sale catalogue.

On the eve of that sale Aston said: “We’ve had horses on the go since February, thinking they were going to Doncaster in May. Some store consignors turned their horses back out, but we’ve kept ours in because the position was so unclear. In a normal year those horses would have been sold, broken in, ridden away and about to be given a break, so it’s not been ideal.

“I’ve seen crises come and go, but never one like Covid. However, in 2010, when the impact of the bank crisis was hitting a peak, we sold Empire Of Dirt [then an unnamed three-year-old store] for €325,000. You can never be sure what might happen.”

Some Irish trainers of pointers have a glut of unraced four-year-olds. Perennial champion Colin Bowe described the situation as “a massive backlog” and said: “I have some 40 unraced four-year- olds to run, but I’m getting around the problem by building more stables. It’s my job to buy and sell horses and if I miss a year [of store buying] I’m in trouble.

“In a good year I would buy 50 stores, but this year it is more likely to be 25 to 30. I’ll be buying fewer horses and hoping for better value.”

County Tipperary-based Sam Curling said: “We have about 35 four-year-olds to run, but we’ll still buy a few stores. With luck we’ll be running plenty of horses when pointing restarts in September, and if the weather is dry the courses do a good job of watering.

“Nice horses will always sell, but the bottom-to-middle market is likely to be challenging for vendors.”

As it turned out trade for stores at Doncaster was very acceptable. The 55 Derby and Land Rover horses at the Monday session averaged £55,585 (up on the figures achieved in Ireland last year) with a 78% clearance rate. The 192 stores who should have been offered at Doncaster in May averaged £24,240, down eight per cent but with a worthy 75% clearance rate, while a small group of August Sale stores (ironically being offered slightly earlier than planned) gave a taste of life in the lower tier. Here too the figures stayed off the floor, with 70% of the 56 lots offered finding homes at an average of £6,362, down nine per cent.

Summing up trade Aston said: “We offered four on Monday who all sold, and seven on Tuesday, of which one might have been bought back. Ten out of 11 were definitely sold, and while not at a record level I’ve certainly seen worse trade.

“Considering events in the world it is amazing that we are here and able to carry on business almost as normal.”

It will be interesting to see how the Derby and Land Rover store sales fare in Ireland where there is likely to be very little British participation on the ground – Henry Beeby and Nick Nugent of Goffs left Doncaster a day early to ensure they could complete 14-day isolation periods in good time ahead of the Land Rover – and trade there will have a bearing on the next link in the chain, the November foal sales. Store vendor and foal buyer Peter Molony of Rathmore Stud, speaking at Doncaster, said: “Our aim is simply to get the capital back on our stores before reinvesting [in foals] at a lower level.”

That cautious note was echoed by Aston, who said: “Foal trade always follows the store trade, and generally they [sales of jump-bred foals] will be down this year, but with highlights. I just hope people still have the desire to take the gamble again, and buy foals and breed mares.

“The margins are desperately tight. Having said we’ve sold ten of 11 horses here at Doncaster, I wouldn’t like to say where the profit margin will lie because it would be scary. Annual turnover is key for us and we’ve been doing it for a long time, but it’s getting tighter and tighter in this game.” 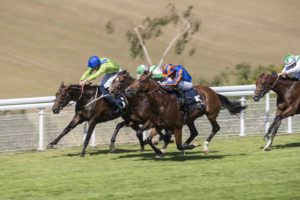 Up Next
'I just love the sport, love the thrill and love the people'