Doyle on top in Saudi opener

Willie Mullins and Hollie Doyle combined for a memorable victory on Saturday with True Self in the Neom Turf Cup, the opener to the Saudi Cup card.

Channel Maker, a multiple Grade 1 winner in his native US, looked to have stolen a march under Joel Rosario as he kicked clear at the top of the straight but Doyle had True Self rolling down the centre of the track and the globe-trotting mare put her stamina to good use to run down the leader and win by just over a length with something in hand.

The pair pulled well of the third, the ex-Roger Varian-trained Emirates Knight.

“I got the splits up the straight and she thundered home,” said Doyle, who was making history as the first female jockey to win on Saudi Cup day. “I was really hopeful. I’d watched her runs and thought she might be my best chance of a winner today.

“It means the world – I rode here yesterday and didn’t have any luck but that’s part of being a jockey, picking yourself up when you’re down.”

It was the 11th win for True Self, a remarkable performer who was last seen winning her second straight renewal of the Group 3 Queen Elizabeth Stakes at Flemington in Australia last November. The daughter of Oscar, who is bred more towards a dual-purpose role, also counts Listed victories at Gowran Park, Newmarket and Bath among her career highlights.

Later on the card, Space Blues dug deep under William Buick to land the Turf Sprint and place Godolphin on the scoresheet.

The Charle Appleby-trained son of Dubawi was the class act of the race, having landed last year’s Prix Maurice de Gheest and Lennox Stakes, and was sent off the 4/9 favourite as a result. However after running forwardly placed, he took time to hit top gear and it was only in the final stages that he was able to overwhelm Dark Power and the former Richard Hannon-trained Urban Icon for a narrow victory.

Godolphin later doubled up courtesy of the Saeed bin Suroor-trained Gifts Of Gold, who sprang a 33/1 surprise to take the Red Sea Turf Handicap under Pat Cosgrave. His authoritative win over Spanish Mission marked a breakthrough for the Invincible Spirit gelding, whose previous career high had come in a class 2 Chelmsford City handicap last August. 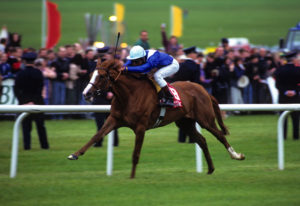 Up Next
Champion Balanchine dies aged 30