First Frankel foal to be sold at Goffs
Stories

Avenir Certain is the undisputed queen of the three-year-old fillies’ division in France after an impressive performance in the Prix de Diane Longines at Chantilly for her second Classic victory of the season.

The first-crop daughter of Le Havre, himself the winner of the Prix du Jockey-Club, Avenir Certain is now unbeaten in five starts, including last month’s Poule d’Essai des Pouliches.

Held up towards the rear of the 12-strong field by Gregory Benoist, Avenir Certain was brought wide down the outside of the pack in the home straight to lead home Amour A Papa by a length, with Xcellence, who was also placed in the Poule d’Essai des Pouliches, just a short neck back in third. The favourite for the race, the Aga Khan’s Prix Cleopatre winner Shamkala, took fourth, while the 1,000 Guineas winner Miss France dead-heated for fifth with the game Ball Dancing.

The second foal of the Mark Of Esteem mare Puggy, Avenir Certain was bred by Elisabeth Vidal at Haras de la Cauvinière, where her sire stands, and she is co-owned by Le Havre’s owner Gérard Augustin-Normand with Antonio Caro.

Her victory further enhances the claims of this season’s European second-crop stallions to be a very exciting bunch indeed. She is one of five Classic winners in 2014 to emanate from a stallion’s first crop along with Oaks victrix Taghrooda, a daughter of Sea The Stars. Mastercraftsman has provided Prix du Jockey-Club hero The Grey Gatsby and Vague Nouvelle, winner of the Premio Regina Elena (Italian 1,000 Guineas), while in Spain, Vallila, a British-bred daughter of Haras du Quesnay sire Dunkerque, won the Premio Valderas (Spanish 1,000 Guineas).

Furthermore, the second and third home in the Prix de Diane are by second-crop sires Montmartre and Champs Elysees, while Mastercraftsman has another venerable representative in Derby runner-up Kingston Hill. 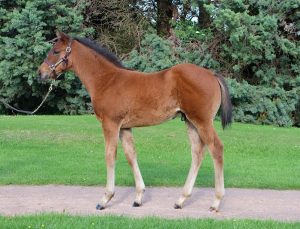 Up Next
First Frankel foal to be sold at Goffs