The trend was set to continue following the 87th running of the Prix Rothschild on Deauville’s straight-mile course.

His three-year-old filly Qemah, continued her rampant progression to triumph in what looked a warm renewal of the Group 1 contest for fillies and mares.

Rouget’s pacemaker Positive Vibrations, also sporting Sheikh Joaan Al Thani’s Al Shaqab silks, was rousted along to gain the lead and took along her nine rivals at a good pace.

Qemah ridden by regular pilot Gregory Benoist, was never too far behind her stable companion in fifth, tracking last year’s winner Amazing Maria for Yorkshire-based trainer David O’Meara. As the pacemaker fell away, the Robert Ogden-owned five-year-old took the lead with two furlongs to go in a bid for back-to-back victories.

As the ten runners fanned out across the course, the likes of 2014 winner Esoterique and former Jim Bolger-trained Steip Amach made their challenges on the stands side, while Qemah showed a potent turn of foot to take the lead from Amazing Maria down the middle of the track with over a furlong to go.

The move was to prove decisive and the filly had enough in reserve in the closing stages to hold off the Francis-Henri Graffard-trained runner-up Volta, by a length and a quarter at the winning line.

This second success at Group 1 level for the daughter of Danehill Dancer, comes on the back of a fine performance in the Coronation Stakes at Royal Ascot last month. She follows in the footsteps of the mighty Goldikova, who coveted this prize four years in succession between 2008 and 2011 for Freddy Head.

She remains relatively lightly raced after just seven runs and rises towards the top of the European three-year-old fillies’ division, alongside her stable companion La Cressonniere and Nassau Stakes heroine, Minding.

For the Pau handler – who hit the remarkable 6,000 career winner mark earlier this year – Qemah’s success becomes his first in the history of the race. It also sees him reach 15 Group race successes for the season, seven of those coming at the highest level.

The three British and Irish challengers did not fare as well as might of been expected. Amazing Maria fared best of the trio finishing in sixth, while the Mark Johnston-trained Lumiere, who was stepping up from Listed company weakened rapidly after racing freely in the early stages.

Falmouth Stakes winner Alice Springs, was supported into favouritism for Ballydoyle and was looking to enact revenge on Qemah who she finished behind at the Royal meeting.

Although nicely positioned under Ryan Moore, the daughter of Galileo couldn’t pick up at the business end of the race and was eased right down after her chance was gone. 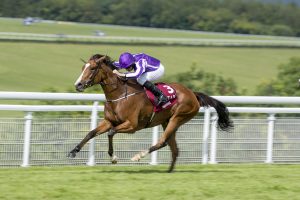 Up Next
Nassau breeze for magnificent Minding