Japanese bloodstock to the fore once more
Stories

Does a low key start matter?

Most fans of Flat racing will have rejoiced on Thursday, 31 March as Catterick ushered in the opening of the turf season. But for some, the midweek start to the season at one of the country’s smaller courses is considered to be too low key.

At this time of the year, however, there’s no easy answer. The start of the Flat is sandwiched between the two major jump racing festivals at Cheltenham and Aintree, which naturally attract much media coverage in the build-up.

The quiet beginning on the level could just be regarded as a welcome return of the potential stars of the summer, with some interesting maidens and early two-year-old races providing key pointers to the hotter Group contests of May, June and beyond. After all, once the Grand National meeting is over, there are only four days to wait until the first Classic trial at Newmarket.

Despite it being his home course, Frankel, the colt everyone is itching to see return to action, will not make his seasonal reappearance at the Rowley Mile. His intended trial is to be in the Greenham Stakes – in which he will avoid carrying a Group 1 penalty – at Newbury before he returns to the scene of his Dewhurst victory to line up in the 2,000 Guineas.

If Henry Cecil lifts the first Classic of the season with Prince Khalid Abdullah’s wonder colt, the season will certainly start with a bang, albeit a little delayed. 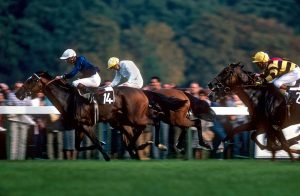 Up Next
Japanese bloodstock to the fore once more