In what is shaping up to be one of the hottest renewals of the Group 1 Coolmore Nunthorpe Stakes, trainer Michael Dods is hoping to taste success at the highest level for a second time as he fields two runners – last year’s winner Mecca’s Angel and improving three-year-old, Easton Angel.

The County Durham handler became a Group 1 winner for the first time 12 months ago when Mecca’s Angel picked up long time leader Acapulco and scorched clear of her rivals to win by two lengths.

Sporting the red and white silks of David Metcalfe, the five-year-old mare has had an indifferent season so far after just three runs. She went down narrowly to the Nunthorpe’s ante post favourite Profitable in the Temple Stakes, her season opener, but badly disappointed next time out when favourite in the King’s Stand Stakes at Royal Ascot.

Yet, she came back to form last time out when running out a three-length winner of the Group 2 Sapphire Stakes over 5f at the Curragh beating the rapidly improving Kevin Ryan-trained Brando in the process.

“Mecca’s Angel is in good form and we are happy with where she’s at,” reflected Dods. “She has been there before and came back to form in Ireland last time, so just given the correct conditions we’re looking forward to it.”

Her three-year-old stable companion has showed improved form this season with one of her best performances coming in defeat last time out in the Group 2 King George Stakes at Glorious Goodwood. The daughter of Dark Angel was held up in the run under jockey Paul Mulrennan and finished well after not getting a clear run in the final two furlongs ending up three quarters of a length behind winner Take Cover.

Easton Angel has only won at Listed level so far in her career and will be making another step up in class in the Nunthorpe Stakes, a step which Dods is more than willing to take.

They’ve both got form at York over 5f, so it will be a difficult choice for him to make over the next few days

Dods said: “I think Paul [Mulrennan] is going to have a hard decision. Easton Angel is improving and she’s only three, but they’ve both got form at York over 5f, so it will be a difficult choice for him to make over the next few days.

“It’s a better race than last year I think as you would expect and it will be a tough nut to crack.”

That is not to mention a potential challenge from a handful of two-year-olds in the shape of the Mark Johnston-trained Yalta and Norfolk Stakes triumphant, Prince of Lir.

Dry conditions are expected on the Knavesmire for the lead up to the Ebor festival, as a belt of high pressure comes in. The course received 7mm of rain on Wednesday night which has changed the going description to good, good to firm in places. 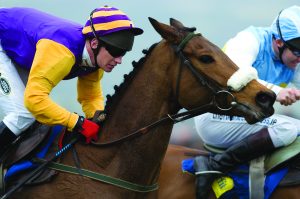 Up Next
Injuries take their toll on Carberry's career