Relentless. Superlatives are running out to describe the season Aidan O’Brien and his team at Ballydoyle are having, summed up by the fact that he is over £4 million clear in the British Flat Trainers’ title.

In a race which he has won four times in the past, O’Brien went on to seal a fifth victory in the Group 1 Dubai Dewhurst Stakes courtesy of warm favourite, Churchill.

The son of Galileo was held up in midfield under Ryan Moore, while stablemate Lancaster Bomber took the seven-strong field along over the seven furlong trip.

As the field raced into the final two furlongs, Churchill found himself in a pocket behind Godolphin’s Thunder Snow, who went for home just in front of him. But as they hit the rising ground the favourite began to get on terms and powered to the front inside the final furlong, winning by a comfortable length-and-a-quarter at the post.

Only 24 hours on from winning aboard Rhododendron in the Filles’ Mile, Moore’s purple patch in the saddle for Coolmore continues. With Champions Day at Ascot a week away, who would begrudge him riding yet another Group 1 before the close of the season?

“He was always going to win, he’s a very very good colt,” reflected Moore. “It wasn’t as evenly run as it should have been. This lads got an awful lot in his favour, there’s not much I don’t think he can do.”

His second victory at Group 1 level already, this takes Churchill firmly to the top of the pecking order among the two-year-old crop in Europe. His decisive win in the Chesham Stakes at Royal Ascot was followed by three easy wins, his most emphatic coming last time out in the National Stakes at the Curragh.

For O’Brien, this triumph now puts him only five behind the great Bobby Frankel’s record of 25 Group 1 winners in a single year.

The Irish champion trainer just missed out on matching that record in 2001 when he saddled 24 Group 1 winners, but with plenty of races left including the Breeders’ Cup meeting, it would be no surprise should he surpass that record this year.

O’Brien said: “It got a little bit messy after the two [furlong pole] and Ryan guided him through lovely.

“He’s physically a very imposing horse, he’s probably a more imposing two-year-old than we have ever trained.”

Earlier in the afternoon, the Mick Channon-trained Kassia took the honours in the Listed Boadicea Fillies’ Stakes over six furlongs.

Although slowly away, the daughter of Acclamation travelled strongly in behind long-time leader Gravity Flow under Graham Lee. She joined that rival inside the final half furlong and got on top in the run to line, sealing victory by a head and bringing her total number of wins this season to four.

William Carson enjoyed the first Group winner of his career as he partnered Best Solution to success in the Dubai 100 Autumn Stakes over one mile.

The son of Kodiac took a lead from the Mark Johnston-trained Montataire through much of the Group 3 contest. Carson asked his colt to pick up just over a furlong out and the duo stayed on well to the line, scoring by two-lengths from runner-up Zainhom. 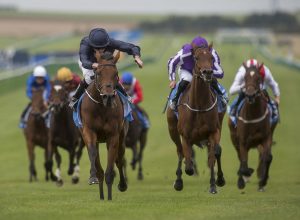 Up Next
Rhododendron takes Fillies' Mile