Dettori back in the spotlight

Frankie Dettori proved he is still very much a leading light of the weighing-room with back-to-back Group 1 victories at Deauville on Sunday.

The first came aboard exciting two-year-old The Wow Signal, who followed up his Coventry Stakes success with victory in the Prix Morny for Dettori’s employer Al Shaqab Racing.

A member of Starspangledbanner’s small first crop, The Wow Signal is trained in Yorkshire by dual-purpose handler John Quinn who was celebrating his first win at the highest level on the Flat.

The following race, the Prix Jean Romanet, saw Dettori get the leg-up from James Fanshawe to ride Ribbons, a Manduro daughter of Soviet Song’s full-sibling Sister Act. Having finished runner-up in a handicap at Ascot on her most recent previous outing, Ribbons was, unsurprisingly, one of the outsiders of the 11-strong field but justified her trainer’s bold race-planning with a determined run in the home straight which saw her cut down her opponents to score by two lengths.

Fanshawe, who also guided Soviet Song to five Group 1 victories, said Ribbons relished the soft ground in France and added: “Afterwards it’s very easy to say we were always confident. At home she’s always looked a very good filly. Her aunt is Soviet Song and like her she puts her head down.”

Ribbons led home a trifecta for British-trained runners, with Roger Varian’s Princess Loulou finishing second, a length and a half in front of last year’s Oaks runner-up Secret Gesture, who is trained by Ralph Beckett. 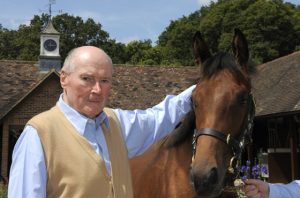 Up Next
Sir Eric Parker dies at 81