Hennessy runner-up Carole’s Destrier will be bidding for revenge next Tuesday as he faces Native River once more, this time in the £150,000 Coral Welsh National at Chepstow.

The eight-year-old came storming home from the last fence in the Newbury showpiece to get within half-a-length of the Colin Tizzard-trained Native River.

His trainer Neil Mulholland, is enjoying his best season to date with 67 winners on the board already and is operating at a healthy 20% strike rate.

The former jump jockey lies third behind champion trainer Paul Nicholls and Nicky Henderson in terms of the amount of winners accrued.

Carole’s Destrier is the second highest-rated chaser in Mulholland’s Conkwell Grange yard behind the progressive two-mile chaser Fox Norton, a recent purchase by the Potts.

His performance with regular rider Noel Fehily in the saddle just under a month ago, on what was his seasonal return, didn’t come as a shock to connections despite odds of 25/1.

“It wasn’t a big surprise the Hennessy run to be honest we were really hopeful,” said Mulholland. “He was up to winning a London National last year and on his last run didn’t run too bad in the Bet365, he’s just a really nice horse and we’ve always held him in high regard.”

A son of Kayf Tara, Carole’s Destrier is a four-time winner over fences and established himself as a staying chaser to follow with a comprehensive win in a Listed Chase at Ascot back in February 2015. He followed that success with a win in the London National at Sandown that December.

Owner Mrs Skipworth has had a handful of National Hunt horses in training down the years, including Mad Max who was trained by Henderson to triumph in a Grade 2 novice chase at Aintree as an eight-year-old.

We’ve always held him in high regard

Mulholland added: “The track at Chepstow will be fine for him and he goes on most types of ground, he’s not ground dependent all he does is jumps and stays and that’s more important to him than anything.

“He’s fresh and well and everything has gone according to plan over the last few weeks. His weight is good and he takes his grass well, he’s a big, big scopey horse.”

Eight-year-olds have a fine recent record in the three mile and five-and-a-half furlong contest, having taken five out of the last seven renewals.

The Irish handler still considers the Aintree Grand National to be the ultimate aim come the spring time. 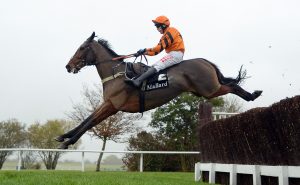 Up Next
Tizzard star clash gets green light