Demand for Kingman underpins another strong day of Goffs trade

Juddmonte stallion accounted for each of the top three lots headed by a €550,000 colt from Airlie Stud

Demand for the progeny of Kingman was a driving factor behind the top end of the market at Wednesday’s session of the Goffs November Foal Sale.

At €550,000, Airlie Stud’s colt out of Dane Street, the dam of champion two-year-old Skitter Scatter and this season’s Denford Stakes winner Victory Dance, was the star turn, selling to Philipp Stauffenberg as a pinhook prospect.

“It is a risk on one side but how many chances do you have to come up with something like this with which to go to war with?” he said. “And as a racing or stallion prospect, there will always be value with a horse like him. I think at that level, there’s a little bit more safety than if you’re buying lower down.

“As the auctioneer said, he has a stallion’s pedigree. I was actually underbidder on the Dubawi [Victory Dance, bought for 700,000gns by Godolphin] as a foal. There’s lots of optimism about him at Godolphin, I hear he is going well and if he wins something nice next year, then it will enhance the page again and make it even more of a stallion’s pedigree. There’s very few out there bred like him – it’s a very good family.

“He’ll come back to me in Germany and will be raised like all the others. Then we’ll make a decision as to where he goes.”

Dane Street, a 13-year-old Street Cry half-sister to Intense Focus, has been a fine servant for Anthony Rogers’ Airlie Stud as the dam of four winners from five runners. In addition to Skitter Scatter, who won the 2018 Moyglare Stud Stakes, and Victory Dance, they also include the Grade 3-placed Data Dependent, who also did her bit to enhance the family this year as dam of the Flame Of Tara Stakes winner Aspen Grove.

Stauffenberg added: “I’ve never spent this much on a foal before although I did underbid the Frankel – Finsceal Beo filly [at €1.8 million] here as a foal and also Victory Dance.”

Juddmonte Farms swooped at €530,000 for the first Kingman colt on offer, a member of Roundhill Stud’s ever-productive Princess Serena family.

The colt’s breeders Bobby and Honora Donworth have long reaped the rewards of this family, notably as breeders of the Group 1 performers Zabeel Prince, Puissance De Lune, Queen Power, Rizeena and Summer Romance. The colt’s dam, the winning Shamardal mare Princess De Lune, has also been quick off the mark at stud as the dam of Zanbaq, whose win in the Rosemary Stakes at Newmarket in late September provided a timely update to the pedigree.

“We’ve been trying to buy into the family for a while and this is the first one we’ve managed to get,” said Barry Mahon, racing manager to Juddmonte Farms. “He’s a half-brother to a filly [Zanbaq] that we know well as she chinned a filly we quite like called Whitebeam in a Listed race at Newmarket. Juddmonte were keen to support Kingman and with a pedigree like this, hopefully he’ll be a good addition to the farm.

“He was very well presented by the breeder, they produce very good horses and it’s a pleasure to buy one from them.”

Meanwhile, the sole Kingman filly on offer is set to go further afield following her sale for €460,000 to Shingo Hashimoto, acting on behalf of Katsumi Yoshida’s Northern Farm in Japan.

The filly was bred by the Assurance Partnership out of Assurance, a winning Teofilo sister to Criterium de Saint-Cloud winner Gear Up, and sold through the Castlebridge Consignment.

“She will race in Japan,” said Hashimoto. “Kingman has done well in Japan, he’s had a Group 1 winner [Schnell Meister] and has a runner in a Group 1 there this weekend. She looked good and the pedigree is very strong. She is lovely.” 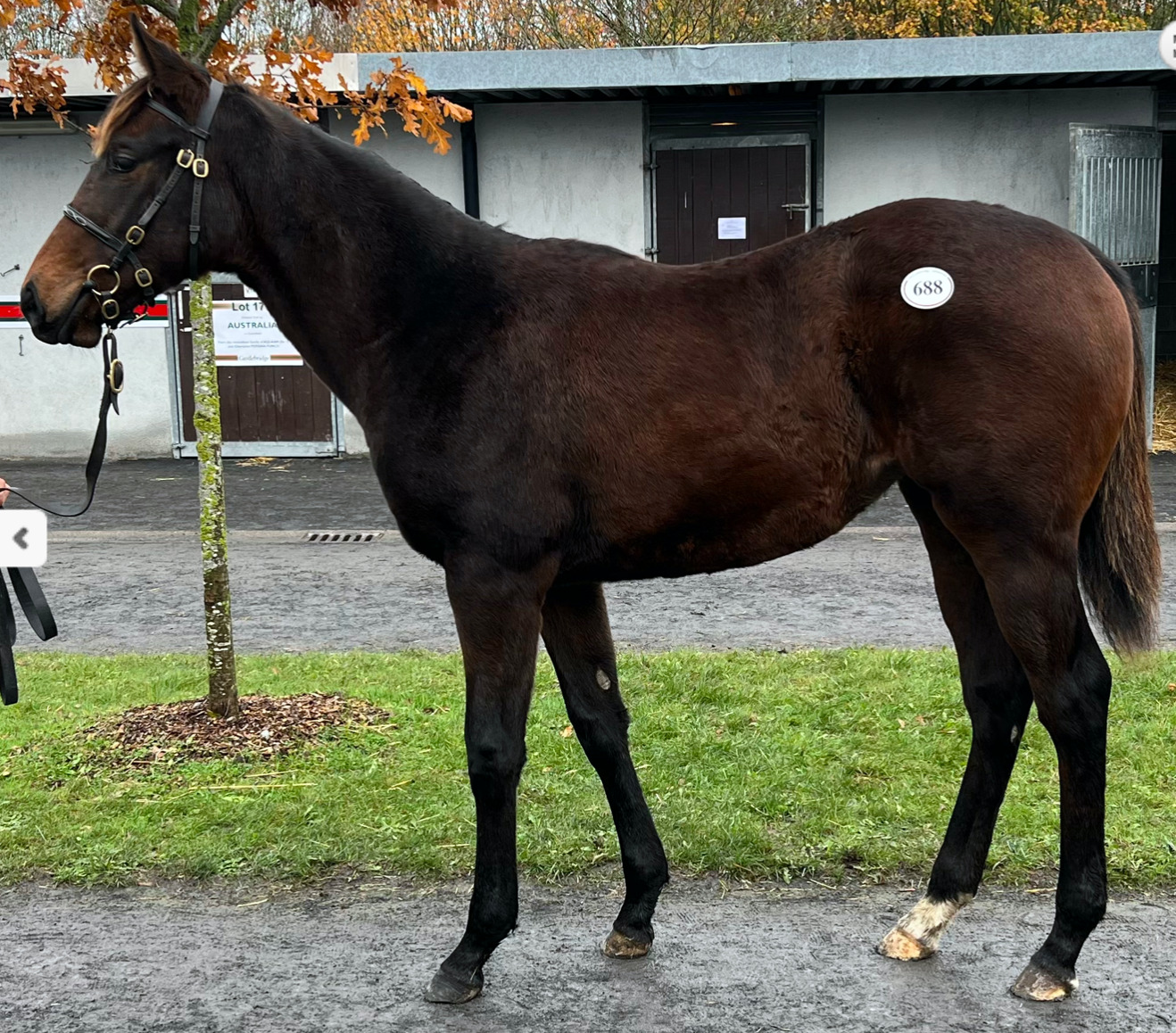 Juddmonte had earlier struck at €340,000 for a Wootton Bassett half-brother to their Derby hopeful Arrest, who capped an excellent hour for his breeder Des Leadon and Mariann Klay by selling for €340,000.

Their dam, Nisriyna, has been a remarkable mare for the pair, primarily as the dam of top Hong Kong performer Dinozzo, one of the best horses sired by Lilbourne Lad, and the Listed-placed Spring Loaded. However, the best could still be in front of her in the form of her Frankel two-year-old Arrest, who fell only a nose short of victory in the Group 1 Criterium de Saint-Cloud for Juddmonte and John and Thady Gosden in the weeks following the publication of the catalogue.

“We have the brother, who’s obviously very talented and was unlucky the last day in France just to get beaten by a nose on the line in a Group 1,” said Mahon. “The Abdullah family were particularly keen to buy him because the brother has done so well for them. I looked at him the other day and said he’s a very nice horse and we’d be happy to have him and they gave me the confidence to kick on and buy him.

“They’re two strong, good-looking horses, this guy might be a little bit sharper than the brother but they’re both quality animals. It was probably an easy decision to buy him with the brother doing so well for us. Arrest is a Group 1 horse and he’ll start off in a Derby trial in the spring and hopefully he’ll progress into a Derby horse.” 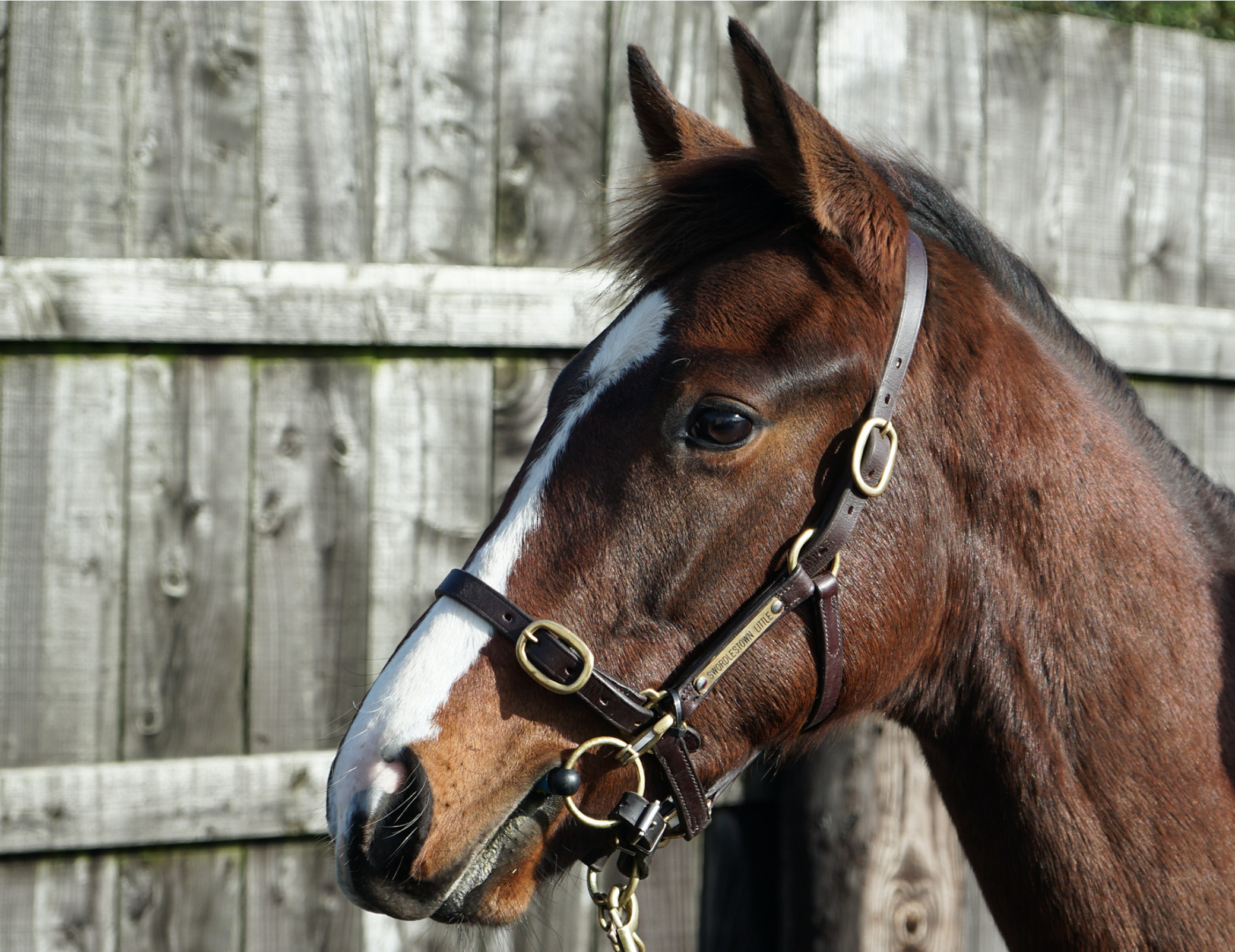 His sale followed hot on the heels of another by the stallion from Swordlestown Little who sold for €280,000 to Tally-Ho Stud. Bred by Graeng Bloodstock out of the Group 3-winning Marju mare Marvada, the colt is a half-brother to Dahlia Stakes heroine Terebullum.

“How exciting to sell what might be the half-brother to next year’s Derby winner,” said Leadon, alluding to the Nisriyna colt. “These Wootton Bassett’s are collector’s items and we’re very lucky to have two here today, one out of Marvada for our good friend Alan O’Flynn and our own colt out of Nisriyna. And we’re very lucky to have the support of Juddmonte, who’ve been wonderful to work with. We’re extremely lucky to work with such professional people while enjoying what we do.

“It’s a very special day. It’s a remarkable testament to Mariann’s work and all the team who help us. These things are never done without the support of a wonderful team on the farm and off it too.”

“Nisriyna has just been a fantastic mare, we’re so lucky to have her. She’s a wonderful mare with a wonderful temperament.”

Remarkably, the daughter of Intikhab was snapped up by Swordlestown Little for just €2,000 at the Goffs November Sale in 2010. Although unraced, she hailed from a fine Aga Khan family that has been since been enhanced by her Group 3-winning half-sister Narniyn.

“Mariann and I rode out for John Oxx and that’s when we first met the mare,” said Leadon. “When she came up for sale at Goffs, we bought her. You can’t do it without the raw materials and these Aga Khan families are wonderful and John Oxx was so good with them that it gave us an insight into the thinking of elite stud farms like that.

“Wootton Bassett was here in Ireland, so he was accessible, and as she had done so well, we wanted to use better stallions. She goes to Kingman next year and we have a Dark Angel in utero.”

Anthony Stroud, signing as Rockbank Bloodstock, outbid Philipp Stauffenberg and Flash Conroy at €330,000 for one of the first No Nay Never foals through the ring yesterday morning in a colt out of the Harry Rosebery Stakes winner Piece Of Paradise. The colt’s sale marked the highlight of the week for both his sire and breeder Rockfield Farm.

“It’s great,” said Mitch Barry, manager of Rockfield Farm. “We always liked the foal from day one. When we came up here everything just clicked with him and he came out of his box every day and did everything perfectly. We couldn’t be happier. He’s been busy but I was humming and hawing whether he’d get to €300,000 so I’m delighted he surpassed that.

“The sire has had a great year and she’s a beautiful mare now in foal to St Mark’s Basilica. We actually have her dam at home too. It’s a great day for Michael O’Flynn and a great day for the farm.”

Lot 602 is a smashing colt by @coolmorestud’s No Nay Never, out of Stakes winner Piece Of Paradise ⭐️

On a busy day for Stauffenberg, the pinhooker had better luck in his pursuit of the preceding lot, a Night Of Thunder colt belonging to the Irish National Stud Mares Syndicate for whom he paid €280,000.

One of only a handful of foals by his popular sire on offer over the next ten days, he is a half-brother to the Group 2-placed Lovely Esteem and out of the Listed-winning Persona Grata, a Sir Percy relation to current Australian star Zaaki.

“There aren’t many Night Of Thunders on the open market and I’ve been very lucky with the sire already,” said Stauffenberg. “I sold a filly by him in Book 1 to Godolphin who was an absolute queen so you could say I’m quite biased towards the sire. This was just an exceptionally good colt and I was keen to get him after missing out on one earlier today.”

Also in demand was a Lope De Vega colt bred and sold by Ballylinch Stud for €310,000 to Trinity Bloodstock. The colt is the first foal out of the Listed-winning Tifosa, a half-sister to Godolphin’s talented Lope De Vega runner Platinum Star.

There was also the end of an era last night with the sale of the final foal to sell through Goffs by Galileo. From her sire’s small, last crop, the filly was bred by Newstead Breeding out of Gold Lace, also dam of the Listed-placed Gold Filigree, and was sold for €290,000 to an online bid from the BBA Ireland. The agency has been busy stocking up on young stock by Galileo this year, purchasing no fewer than eight yearlings by the multiple champion stallion across Europe.

The foal sale concludes tomorrow from 10am. 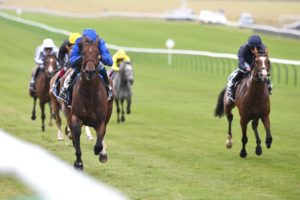