Aunt Pearl was the first to succeed in this year’s edition of the championships for Cox, held behind closed doors in America owing to the coronavirus pandemic, as she led from pillar to post to get the better of Irish challengers Mother Earth and Miss Amulet.

That was swiftly followed by Essential Quality, sporting the blue silks of Sheikh Mohammed’s Godolphin operation, who was stoked to victory by jockey Luis Saez to overhaul Hot Rod Charlie and Keepmeinmind in the closing race on Friday’s card.

With their victories, both Aunt Pearl and Essential Quality extended their unbeaten records to three wins from three runs.

Aunt Pearl, who had taken the Grade 2 Jessamine Stakes (1m½f) at Keeneland earlier this month, was sourced from Book 1 of the Tattersalls October Yearling Sale by Bradley Weisbord and Liz Crow’s BSWCrow agency for 280,000gns last year.

Bred by Ballylinch and Ecurie Des Charmes, Aunt Pearl is out of the Hurricane Run mare Matauri Pearl and is from the family of top-level performers Molly Malone, Monsun and Brametot.

Godolphin homebred Essential Quality boasts a classy pedigree being a son of leading sire Tapit and out of the Elusive Quality mare Delightful Quality, herself a half-sister to Breeders’ Cup Juvenile Fillies heroine Folklore.

Vequist strikes in the Juvenile Fillies

With the early fractions set by Dayoutoftheoffice, Vequist was settled behind the leaders by Joel Rosario and as the field turned from home, she gained ground following the rail up the inside to win by two lengths.

It is the second Grade 1 the Robert Reid-trained Vequist has captured this season having landed the Spinaway Stakes at Saratoga in September.

Uncle Mo was on the board with a winner of his own earlier on Friday when Wesley Ward’s highly regarded Golden Pal produced a blistering run from the front to capture the Grade 2 Breeders’ Cup Juvenile Turf Sprint (5½f).

Having last been seen finishing second to The Lir Jet in the Group 2 Coventry Stakes at Royal Ascot in June, Golden Pal had gone one better than his dam Lady Shipman, who had come up a neck short in the 2015 edition of the Breeders’ Cup Turf Sprint.

Ward, who trains the two-year-old for owner-breeder Randall Lowe, said: “He’s just amazing. I got a little worried on the backside. Irad [Ortiz] kind of lost a little momentum there and took a pretty good hold of him, but then he just accelerated.

“When he accelerated past the quarter pole, I knew we were ok. I got a little worried on the last part and was hugging onto my son, but we got there. He’s a champion colt. Thank God [Lowe] gave him to me to train, I really appreciate it.

“[Next year’s Breeders’ Cup] is where we’re heading, but first we’re going to Royal Ascot. Here we come!”

Fire At Will causes upset in Juvenile Turf

Despite Battleground’s best efforts, he could not emulate his outstanding dam Found as he failed to reel in runaway Grade 1 Juvenile Turf (1m) scorer Fire At Will to secure the win for trainer Michael Maker and jockey Ricardo Santana Jr.

Ward’s front-running Outadore had set sail for home rounding the final turn but Fire At Will showed a remarkable burst of speed that saw him gain ground before denying the long-time leader. Battleground flashed home late on but was three lengths back in second with a neck to Outadore in third.

Maker said: “I thought he was overpriced – he’s done nothing wrong and is a very professional and classy horse.

“We have been high on him since day one, and with each race, he’s gotten better. It’s very satisfying to get Three Diamonds Farm [owners] their first Breeders’ Cup win.” 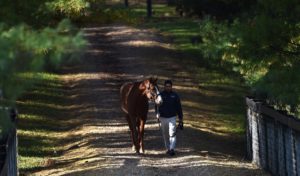