Fifteen Graded or Listed races have been run in Japan since the start of the new year and four have been won by the offspring of Deep Impact, including Sunday’s Grade 3 Kisaragi Sho at Kyoto, in which he sired the first three home.

Deep Impact, a superb racehorse and an increasingly successful sire

The winner, three-year-old World Ace, is out of Mandela, an Acatenango half-sister to the 2007 Horse of the Year Manduro. A Listed winner and third in the Preis der Diana (German Oaks) in her home country, Mandela was transported to America in the second half of her three-year-old season and was later third to Megahertz in the Grade 2 Santa Barbara Handicap when trained by Bobby Frankel for Gary Tanaka.

Her first two foals, both bred in America and by War Chant and Dynaformer respectively, realised $230,000 and $700,000 when selling to Epona Bloodstock and John Ferguson, and the mare herself also changed hands at Keeneland when sold carrying a Mr Greeley foal to Katsumi Yoshida for $1.4 million in 2007.

The first three in the Kisaragi Sho were all bred by Yoshida family operatives – Northern Racing, Northern Farm and Shadai Farm – as was Donau Blue, who won the Grade 3 Kyoto Himba Stakes on January 29.

The four-year-old filly is the second Graded stakes winner this year for the Cheveley Park Stakes winner Donna Blini, another Katsumi Yoshida purchase, this time for 500,000gns at the 2006 Tattersalls December Sale. Her three-year-old, also by Deep Impact and named Gentildonna, landed the Grade 3 Sho Shinzan Kinen over a mile at Kyoto on January 8.

Deep Impact’s other stakes winner of the year to date, Best Deal, also has European origins. He is out of the French-bred Commercante, who won the Group 3 Prix de Psyche before being exported to the US where she won the Grade 1 E P Taylor Stakes.

Deep Impact’s success is matched by another Shadai Stallion Station resident, King Kamehameha, who has also sired four Graded stakes winners this year, including Danon Ballade’s conqueror To The Glory, and Rulership and Hiraboku King, both of whom were successful on January 22. 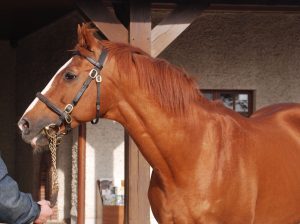 Up Next
Trempolino retired from stud duties