The racing world was left in mourning after news break on Tuesday evening that multiple Group 1-winning jockey Pat Smullen had died from pancreatic cancer. He was 43.

Smullen, who was a nine-time Irish champion jockey, had been diagnosed with the illness in 2018 and was given the all-clear after successful treatment last year, before suffering a relapse in recent months.

During his time battling cancer, Smullen was behind a number of fundraising initiatives for Cancer Trials Ireland, including last year’s legends race as part of Irish Champions Weekend, which helped to raise €2.5 million.

Smullen’s career in the saddle saw him record a number of big-race wins including the 2,000 Guineas on Refuse To Bend, the Irish 1,000 Guineas on Nightime and Bethrah, four consecutive successes in the Irish St Leger on Vinnie Roe and the Epsom Derby in 2016 on the Aga Khan’s homebred Harzand.

Brian Kavanagh, Chief Executive of Horse Racing Ireland, told the Racing Post: “Today is the saddest of days as Irish racing comes to terms with the loss of one of our brightest stars.

“Pat Smullen was a nine-times champion jockey, but his achievements in the saddle pale in comparison to his qualities out of it.

“All our thoughts are with Pat’s wife Frances, children Hannah, Paddy and Sarah, his mum Mary, brothers Ger, Sean and Brian, his close friends and colleagues in the weighing-room, trainer Dermot Weld and all the staff at Rosewell House.

“Pat was an inspiration for the selfless way that he faced up to the most awful of diagnoses and his fundraising efforts through Cancer Trials Ireland will benefit many people in the future. The Pat Smullen Charity Raceday will go down in the annals of Irish racing as one of the best days ever at the Curragh.

“For Pat to be taken from us at such a young age is hard to comprehend. His memory will live long wherever horse racing is discussed. May he rest in peace.” 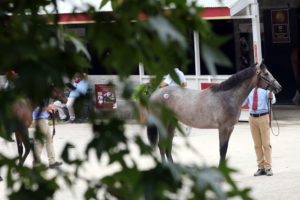 Up Next
Flurry of million dollar lots fuel Keeneland