The Queen - a hugely passionate supporter of horseracing
Stories

Evie Stockwell, mother of John Magnier and a successful owner-breeder in her own right, has died at the age of 96.

Described in Vincent O’Brien’s official biography as a ‘lady of great style’, Stockwell most recently had a select group of horses running in her colours – the ‘Madonna blue’ and brown that belonged to her late husband Tom – each year. From personal recollection, every winner brought her joy, but in particular the Group 1-winning siblings Brave Anna and Hit It A Bomb, who between them won the Cheveley Park Stakes and Breeders’ Cup Juvenile Turf. The pair were out of Group 3 winner Liscanna, herself a daughter of Stockwell’s Listed-winning mare Lahinch, named like several of Stockwell’s horses with a golfing theme in mind.

Other good horses to carry her colours include Fairyland, winner of the Cheveley Park and Flying Five Stakes, Luas Line, who was trained by David Wachman to win the 2005 Garden City Breeders’ Cup Handicap at Belmont Park, Toroca, who ran third in the 2001 1,000 Guineas and later landed an Italian Group 3, Kitza, who was placed in the Irish 1,000 Guineas and Oaks, and Theann, named after Stockwell’s granddaughter Anthea who won the 2007 Summer Stakes at York and later produced Grade 1 winner Photo Call. She also owned Listed winner We Are Ninety with her twin sister Lady Mimi Manton.

Only last year, Stockwell got a great kick out of Glounthaune winning the Killavullan Stakes; that colt ran a fine second in Saturday’s Boomerang Mile at Leopardstown.

Cork-born Stockwell wasn’t born into racing but she enjoyed the sport growing up and in 1947, became fully immersed in the world when she married Tom Magnier, owner of Grange Stud in Fermoy, home of the great jumps stallion Cottage and 1946 Cheltenham Gold Cup winner Fortina, the only entire to ever win the race.

Tom Magnier died in 1962 and Stockwell was left with four children – John, Peter, David and Anne – to raise. John Magnier had been studying at Glenstal Abbey but left school at 16-and-a-half to ensure the smooth running of Grange, then also a working farm. In time, of course, he would become the most successful stallion master of his time, his vision and skill key to driving Coolmore into the force it is today.

David today manages Castlehyde and Grange Studs while Anne married Tony O’Callaghan, owner of Tally-Ho Stud; appropriately, the Mullingar farm bred both Fairyland and Glounthaune and both were by Kodiac, a stallion that Stockwell was particularly fond of.

Peter was also a successful breeder at his Brittas House Stud and died in January 2019.

Eddie O’Leary, a close friend of Tally-Ho, paid tribute. He said: “I’ve known Mrs Stockwell for a long time now. She was an absolute lady, always put a smile on your face and knew how to put people at ease. She was a superstar. The world has lost two Queens this week.”

I had the pleasure of knowing Mrs Stockwell for the last few years. She had a remarkable zest for the sport, knowledge and by all accounts, was an excellent judge of horse flesh. I remember she took a great interest in the goings on at Tally-Ho Stud from her vantage point in the stallion yard and also naturally had a great pride in watching Coolmore develop into the juggernaut that it is today. Through her four children, the architects behind Tally-Ho, Coolmore, Brittas House and the Coolmore National Hunt division, she has left a remarkable legacy and is going to be sorely missed. 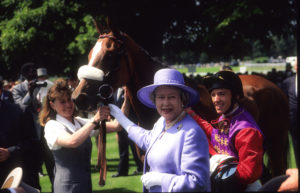 Up Next
The Queen - a hugely passionate supporter of horseracing