Pinatubo, Kameko and co all set to begin stud careers in 2021
Stories

Highly influential owner-breeder, alongside his wife Patricia, has died at the age of 84

Cheveley Park Stud’s Managing Director Chris Richardson has paid tribute to the stud’s co-owner David Thompson, who passed away on December 29 at the age of 84 following a short illness.

With his wife Patricia, the Thompsons purchased the Newmarket operation in 1975 when the historic property was just 270 acres. Since then, it has turned into a top-class breeding and ownership outlet that has swelled to nearly 1,000 acres.

Their red, white and blue silks have been synonymous on racetracks around the world and they have enjoyed many top-level successes over the years including the 1,000 Guineas with Russian Rhythm and Prix de Diane with Confidential Lady.

The stud is renowned for standing high-class stallions, currently headed by homebred stalwart Pivotal alongside the likes of Kyllachy, Dutch Art, Mayson, Twilight Son and Ulysses.

In recent years, the Thompsons have returned to the National Hunt sphere with a number of high-profile purchases including multiple Grade 1 hero Envoi Allen and the Henry de Bromhead-trained A Plus Tard, who took the Grade 1 Savills Chase at Leopardstown last week.

The pair had previously purchased 1992’s Grand National winner Party Politics just days before he ran in the Aintree showpiece.

Richardson said: “David Thompson was a very generous, meticulous, sometimes unpredictable man, who always had a certain charm. He inspired everyone with his insatiable enthusiasm for business, which, thankfully, included a love of racing and breeding, alongside his wife Patricia and their family.

“He had tremendous foresight and would often ask a question, knowing full well the answer. I always tried to be prepared, as one never knew when the thrill and challenge of another equine adventure would catch his imagination.

“His latest venture into National Hunt racing proved a huge success and gave him so much pleasure.

“DBT’s recent visit to the Cheltenham Sale held in Newmarket, and to the stud, gave him and all here so much joy. He certainly enriched the lives of all those he met and who knew him. He will be much missed.”

Thompson is survived by wife Patricia and their three children, Richard, Rosalind and Katie, and seven grandchildren. 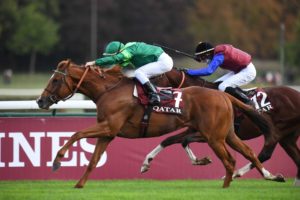 Up Next
Pinatubo, Kameko and co all set to begin stud careers in 2021