Tolworth falls the way of the Tizzard's
Stories

Now priced at around 5/2 for the Albert Bartlett at Cheltenham in March, the six-year-old gelding was held up just in behind the leader under Jack Kennedy in the familiar Gigginstown silks.

At what looked visually a slow pace, the Willie Mullins-trained Turcagua took up the running with a circuit to go.

As the six runners came into straight, Death Duty loomed large travelling well with the other Mullins’ runner Augusta Kate and Ruby Walsh tracking him through.

The favourite hit the front between the last two flights but it looked as if he would have to fend off a challenge from the mare coming to the last.

A crashing fall from the latter at the last left the two-and-a-half mile prize firmly in the hands of Death Duty, who strode out to the line to win by nine lengths.

“To be honest, I thought they didn’t go fast enough,” Elliott said. “I thought Blood Crazed Tiger would make them go a good gallop. Our lad is just an out-and-out stayer.

“They were upsides when the mare fell, so it’s hard to say but the one thing you know about our horse is that he would have kept pulling out. Jack thought he had it covered. You never know when Ruby is upsides you, but our lad is a very good horse.”

A son of the US-bred Shantou, Death Duty extends his winning sequence to three. His previous two victories both came at Navan in a Grade 2 and Grade 3 novice hurdle.

Our lad is just an out-and-out stayer

For the young Kennedy, who has built up a good association with the County Meath handler, this is the second Grade 1 of his short career so far.

His first only came last month when he partnered the stables Outlander to success in the same colours in the Lexus Chase at Leopardstown.

Elliott added: “He’s a proper, big three-mile chaser. At this stage, of all the good horses I’ve had, none of them were ever as good as hurdlers as him, but that doesn’t mean they’ll do it as chasers. I’d say he’s a fair one.” 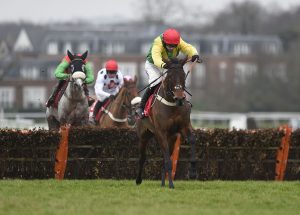 Up Next
Tolworth falls the way of the Tizzard's