The County Tipperary handler announced the news earlier this week

After a 20-year career which has included no fewer than 11 victories at Group 1 level – four of which came only last season – David Wachman has taken the decision to wind down his yard at the end of the Irish Flat racing season.

The 45-year-old initially set up as a jumps trainer, his first winner coming with Middle Mogs in a maiden hurdle at Clonmel in 1996.

Once he married Kate Magnier the daughter of Coolmore powerhouse John Magnier in 2002, his allegiance switched to the Flat to train predominantly for his father-in-law.

Two years later Damson gave him his first success at the highest level when winning the Group 1 Phoenix Stakes under Kieren Fallon beating none other than the Aidan O’Brien-trained Oratorio.

Since then, Wachman went on to covet himself as one of the top trainers in Ireland, picking up another ten Group 1’s on top of a whole host of Group races in five different countries.

Some of his most memorable winners include Bushranger, who won the Prix Morny at Deauville and the Middle Park at Newmarket in 2008. That year was his best season on record having secured 40 winners and getting himself close to £1 million in total prize money.

One year later he was to prove again his touch with fillies when Again went on to win the Irish 1,000 Guineas following up her Moyglare Stakes victory the previous autumn.

Last season two of his fillies’ made a huge splash. Legatissimo, a daughter of Danehill Dancer went on to complete a Group 1 treble claiming first the 1,000 Guineas at Newmarket before landing the Nassau Stakes and the Coolmore Fastnet Rock Matron Stakes towards the end of the season.

Rapid-improver Curvy, who started her career in low-grade handicap company went on to triumph in the Group 2 Ribblesdale Stakes at Royal Ascot en route to success in the Grade 1 E.P. Taylor Stakes at Woodbine in mid-October.

“While not taken easily the decision to retire will allow me to spend more time with my family as well as pursuing various other business interests,” reflected Wachman.

“Over the last twenty years I have trained for many wonderful owners and I would like to extend my deepest gratitude and thanks to them as they have been absolutely central to the success that we have enjoyed here.

“Also a big thank you also goes to each and every one of my staff members for their unwavering loyalty, dedication and commitment and I wish them all the very best for future.”

As we approach the final months of the season Wachman has only saddled four winners from 95 runners, a stark contrast from last year’s total of 32. 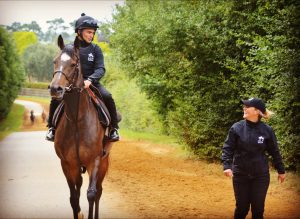 Up Next
Britain's youngest trainer to take-off