There are things David Marnane has achieved that no champion trainer has, with a fraction of the resources available.

Does that make the Royal Ascot winner better than a champion trainer? It certainly suggests he has the skills to be competing in that bracket.

“When we get the horse, we know what to do with it – and I think we’ve proven that,” he says. “I don’t see us as competing against the likes of Aidan O’Brien and Dermot Weld.

“I take a different view; we’re trying to run our own show here, and I’m not interested in what they’re doing.

“Do I want to be champion trainer? There’s always the aspiration to be bigger.

“We’re very ambitious and with support we can compete successfully at home and abroad – our record demonstrates that. But we have only ever had around 20-30 horses. That’s the issue.”

It is a feature of the Irish racing landscape that a trainer of Marnane’s considerable ability and international success is just a sidebar on the domestic scene.

Despite consistent, quality results at the Dubai Carnival, being the only Irish trainer to win the Portland Handicap or Victoria Cup in the past 50 years, and being the first Irish handler in 27 years to take the Wokingham Handicap, Marnane’s numbers remain static.

Even after Settle For Bay won him his second Royal Ascot trophy in June, when battling back from a fractured pelvis to win the Royal Hunt Cup.

That was a perfect example of the skill Marnane and his team have in executing plans, the piece of weaponry that sets them apart.

“We had Settle For Bay pencilled in for last year’s Britannia, but when he got injured we had to put him away for nearly all of his three-year-old year,” he says.

“We brought him back on the all-weather in the autumn, and once we saw him start to progress, we knew we had a well-handicapped horse when he got to a mark of around 99 at Christmas.

“The Royal Hunt Cup then was on our minds and we began working back from there.”

Settle For Bay won all four of his starts over a mile at Dundalk. He took a break from January to May, then finished fourth in a seven-furlong handicap at Leopardstown, before heading straight to Royal Ascot for a two-and-a-quarter length win in the race that Marnane set out to win six months earlier.

“It’s hard to get an unexposed horse into those races nowadays, as the minimum rating is about 98 or 99,” he said.

“Settle For Bay was probably unexposed because we hadn’t gotten to the end of him, due to his injury.

He added: “I think they can also improve through learning, especially in sprinting. It’s about learning how to do it in that game, and that can take a horse a long time.”

I think one of the biggest barriers we have is location

“Being around horses is the number one reason I do this,” he says. “No doubt about that. Looking at horses every day, and looking for the next good one, and plotting a course for them – that’s why I’m here.

“You’re always looking forward. Even if you have a Royal Ascot winner, as soon as they’ve crossed the line you’re thinking, ‘Where is he going next?’

“I really enjoy that, and I enjoy owners who enjoy racing. It’s not an easy game, but it is such an exciting sport. We love sharing that.”

The stable’s runners will be travelling again this winter, with Settle For Bay on course to recover from a stone bruise in time for the Dubai Carnival. It is a familiar routine, but Marnane wants more.

“In an ideal world I’d like to have 50 horses in training,” he said. “I think one of the biggest barriers we have is location – being down in Tipperary as opposed to on the Curragh or in Newmarket.

“It’s frustrating, because when people come into our yard, see the facilities – and get a good breakfast – more often than not, they will get involved.”

An initiative pushing towards that goal is Marnane’s innovative all-in yearling syndicates; ten members pay one annual fee to own a pool of two or three yearlings until the end of their two-year-old career.

It has recently thrown up Listed-placed Freescape and promising Requinto colt Jarrocho, and will be launching again at the yearling sales this autumn.

Marnane adds: “To be honest, we’ve been doing what we do with a limited budget for years. I don’t know, do we buy well or are we just lucky?

“But what I do know is that we can do this, we want to build, and we just need people to sit up and take notice. Our doors are completely open.”

Delve into these fascinating articles…

Adam Beschizza on making a name for himself in America 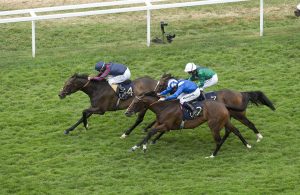