Hungry for the challenge
Stories

David Johnson, the owner of 2008 Grand National winner Comply Or Die and a major supporter of National Hunt racing, died on Saturday at the age of 67.

Johnson’s famous blue, green and white silks were borne to victory by many of the top jumpers of the modern era, including the dual Grade 1 winners Well Chief and Our Vic. He was champion jumps owner on six separate occasions, most recently in 2007.

A self-made businessman whose fortune was amassed in the finance industry, Johnson enjoyed notable success at the Cheltenham Festival, winning the Arkle Chase four times with Or Royal (1997), Champleve (1998), Well Chief (2004) and Contraband (2005), while Liberman won the Champion Bumper in 2003.

All were trained by Johnson’s principal trainer of many years, Martin Pipe, while Our Vic won the Ryanair Chase and Comply Or Die landed the Grand National in David Pipe’s first year with the licence after his father’s retirement.

Having started out as an owner on the Flat, Johnson won the Middle Park Stakes with the Robert Williams-trained Mister Majestic in 1986 but it is the winter game with which he will forever be associated. Cyfor Malta, a winner four times at Cheltenham and of the John Hughes Chase at Aintree, became the first of his three winners of the Thomas Pink Gold Cup (now Paddy Power Gold Cup) in 1996 along with Challenger du Luc (1998) and Lady Cricket (2000).

Johnson retained the French-bred mare Lady Cricket, who recorded seven of her 11 victories in his colours, as a broodmare. She has produced two winners to date, the five-time victrix Swing Bowler and promising dual bumper scorer Red Sherlock. 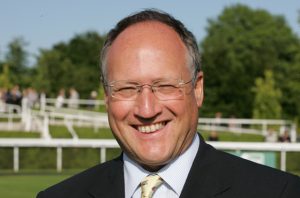 Up Next
Hungry for the challenge