By The Owner Breeder staff 30 September 2015

Darley has announced the launch of a new incentive for breeders linked to four stallions standing their first seasons in Britain, Ireland and France in 2016.

The Darley Club, which in its inaugural year includes Group 1 winners Hunter’s Light and Outstrip, Group 2 winner Fulbright and multiple Group 3 winner French Navy, encourages breeders to use stallions in their second and third seasons by offering free coverings in those years as long as the first year’s nomination fee is paid in full up front.

Breeders who use a stallion in all three seasons will then be rewarded for their loyalty with a lifetime breeding right.

Darley’s Director of Stallions Sam Bullard said: “The Darley Club offers breeders a fantastic and very affordable way of breeding to quality stallions. The chance to secure a lifetime breeding right for the cost of just one nomination is a great opportunity for breeders, and offers fantastic terms which put the balance of power firmly in the hands of the breeder.”

All four stallions in the scheme are sons of current successful Darley stallions. Hunter’s Light, a seven-year-old representative of the successful Dubawi-Barathea cross, won 12 of his 27 starts, including the Group 1 Premio Roma and Group 1 Jebel Hatta. He will stand at Darley’s French base, Haras du Logis.

Kildangan Stud will welcome French Navy, a son of Shamardal whose four Group 3 victories include this season’s Earl Of Sefton Stakes at Newmarket, along with Fulbright, by Exceed And Excel. The winner of the Listed Woodcote Stakes at Epsom as a two-year-old, Fulbright went on to notch a further eight victories, including the Group 2 Dubai Challenge Stakes.

Another son of Exceed And Excel, the Breeders’ Cup Juvenile Turf winner Outstrip, completes the quartet and will stand at Dalham Hall Stud in Newmarket. Fees for all four stallions are yet to be announced. 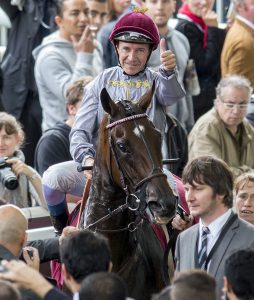 Up Next
‘Fabulous Treve is still maturing’