Dante delight for the Johnston team

Middleham maestro Mark Johnston was all smiles after the Group 2 Betfred Dante Stakes, as Permian advertised his Derby credentials in no uncertain terms by landing the mile and a quarter contest.

Raced three times already this year, the son of Teofilo took a position on the inside under Franny Norton behind the Godolphin duo of Wolf Country and Benbatl.

As the ten runners turned into the home straight, Permian made good ground towards the far-side while favourite Benbatl travelled well in a close second.

The grey silks of Permian hit the front a furlong out but were strongly challenged by Pat Cosgrave and Benbatl. Johnston’s charge kept finding in the run to the line and went on to take the prize by three quarters of a length.

Ante-post gamble for the Investec Derby, Crystal Ocean ran on to finish a close third for Sir Michael Stoute, who last took the race with The Queen’s Carlton House.

Subsequent to the race Godolphin’s Chief Executive, John Ferguson, revealed that the colt would be supplemented for the Epsom Classic in two weeks time, the fee being £85,000.

“I was being a little bit smart on him at Epsom, I took an opportunity and I probably went five to six strides too early but it’s worked out for me today.

A busy horse this season, Permian’s previous start saw him run out a facile four-length winner of a Listed race at Newmarket’s Guineas meeting.

Prior to that, he went down by a short-head to the John Gosden-trained Cracksman in the Derby trial at Epsom.

Johnston said: “I’m absolutely delighted he’s not in the Derby but that might change.

“A huge amount of the credit has to go to John Ferguson who from the minute the horse came into the winners’ enclosure at Newmarket said what about the Dante.

“The rest of us were all hesitant and would of taken in races he was already entered in.” 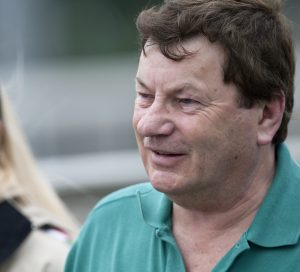 Up Next
Veteran Swinbank passes away