Dandy Man, one of three stallions at stud from the sole crop of champion sprinter Mozart, has made an eye-catching start with his first-crop runners, with eight individual winners from just 15 starters.

The Ballyhane Stud resident enjoyed a double on Thursday courtesy of victories by the Richard Hannon-trained Beau Nash at Salisbury and a first-time-out win for Parbold at York, while Fine N Dandy visited the Chester winner’s enclosure last week.

Richard Fahey trains Parbold, who runs in the July Cup-winning colours of Mayson for owners David and Emma Armstrong, and he has so far been responsible for three of Dandy Man’s winners, the other two being Peniaphobia and Canyari.

Bookmaker Stan James compiles an annual market for the first-season sires championship and has cut Dandy Man from an initial 28/1 shot to be leading freshman by individual winners at the start of the Flat season to second-favourite behind Bushranger at 13/8.

“In all our years betting on this competition, I cannot remember a first-season sire that has matched the dramatic early impact Dandy Man has made so far this season,” said Stan James spokesman Joseph Burke.

Sea The Stars remains 4/6 favourite to be leading first-season sire by prize-money earned, though he is yet to have a runner.

Bushranger, Intense Focus, Captain Gerrard, Mastercraftsman and the Italian-based son of Galileo, Red Rocks, have each had three winners apiece this season, with Intense Focus leading that quintet by earnings. 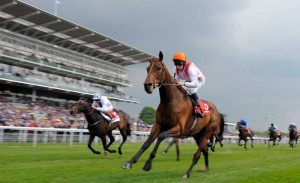 Up Next
Libertarian fuels Derby dream