Dancing Rain set to be star

With the European yearling sales set to start in Deauville this weekend it seems early to be thinking about the breeding stock sales but Tattersalls’ December Sale enjoyed a decent boost on Wednesday with confirmation that the 2011 Oaks winner Dancing Rain is to be sold at Park Paddocks in foal to Frankel.

The mares’ section of the December auction always boasts several gems and Martin and Lee Taylor, who raced the daughter of Danehill Dancer, are entitled to feel that their offering from the fledgling operation Clairemont Stud, which they own in partnership with Liam and Jenny Norris, will be the most glittering of them all. She is set to be sold on Monday, December 2.

Bought by Liam Norris and William Huntingdon for €200,000 at the Goffs Orby Sale of 2009, Dancing Rain’s front-running Epsom victory was her most memorable outing but she also went on to success in the German equivalent, the Preis der Diana, before winning the inaugural QIPCO Fillies’ and Mares’ Stakes on British Champions’ Day.

As well as boasting a stellar covering to the world’s greatest racehorse, the five-year-old mare owns a first-rate pedigree. She is a half-sister to Sumora – herself a 2.4 million-guinea purchase at the December Sale of 2011 and whose daughter, the Group 1 winner Maybe, by Fankel’s sire Galileo, fetched €340,000 as a yearling. Furthermore, Dancing Rain’s dam Rain Flower is half-sister to Derby winner Dr Devious.

Tattersalls Chairman Edmond Mahony is understandably looking forward to the Classic heroine’s appearance in the ring. He said: “Dancing Rain is a real jewel and it is a very rare honour to be entrusted with the sale of a broodmare of such quality. There has not been an Epsom Oaks winner carrying her first foal to be offered at public auction for more than 50 years which puts Dancing Rain’s sale into clear perspective.

“She is a gorgeous mare, she is a dual Classic winner and she is in foal to the best racehorse most of us will ever see. It is hard to imagine a more complete package and the Tattersalls December Sale will be the perfect stage for such a star.” 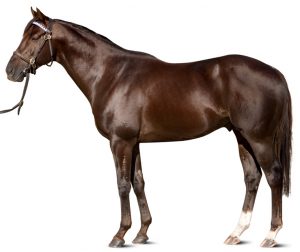