“We couldn’t have asked for a nicer horse as a first stallion,” says Alne Park Stud manager Nick Pearce while giving Dink a brush over for the camera.

The dark bay, apparently unticklish, is the personification of gentle, showing none of the traits you would expect of many stallions, especially during the breeding season.

“Take him to the covering shed and he knows exactly what his job is,” continues Pearce, now standing directly behind Dink in double-barrel kicking range while taking a few rogue straws from his tail, “yet he travelled here from France in a lorry with mares on board. He’s 16.1hh and he throws a good-sized foal.”

Minutes later the 17-year-old is led out, growing an inch in the process while walking purposefully into the yard which looks across part of the Skelton family’s Warwickshire-based racehorse training complex. It grew from the showjumping world of Olympic gold medal winner Nick Skelton, whose eldest son Dan and younger son Harry are now at the forefront of jump racing as trainer and jockey respectively.

That makes Dan’s recent investment in a little-known stallion all the more intriguing until you discover the interest he and his wife Grace have in breeding, and remember that in Nube Negra he trains Dink’s best progeny.

Half a length separated Nube Negra from victory in steeplechasing’s most prestigious two-mile race, the Cheltenham Festival’s Queen Mother Champion Chase in which he finished second to the mare Put The Kettle On. That gallant effort followed a comprehensive victory over Altior in Kempton’s Grade 2 Desert Orchid Chase, a win that elevated the Terry Spraggett-owned chaser to a place among the best of current two-mile chasers, and gave his little-known sire a lift, too.

Skelton says: “We have always had an interest in breeding, and we subsequently got to know Nube Negra’s breeder Luis Cervera [a showjumping friend of his father’s], who also owned Dink, plus Nube Negra’s four-year-old brother Noche Negra and a two-year-old sister.

“We bought Nube Negra’s two siblings [and their dam, Manly Dream, a daughter of Highest Honor] and then it transpired Luis wanted to find Dink more opportunities. We recognised the Brexit situation would make travelling more difficult and decided that rather than take the mountain to Mohammed we would bring Mohammed to the mountain. He is going to cover the majority of our mares, but I think he will do well in Britain because he will put speed into mares.”

At the start of the current breeding season Dink, a son of Poliglote, was standing in France at Haras de la Bareliere, but had covered tiny numbers of mares. An approach was made to the Skeltons and a deal was struck, although when the news broke Dan was quick to say his wife, with assistance from stud manager Pearce, would be responsible for the stallion.

Grace is allergic to horses and trained as a lawyer, yet she comes from a Somerset dairy farming family, and her father, Robert Blackburn, owned some useful jumpers in past decades, namely Mr Moonraker and Holemoor Star who were trained by Susan Morris. She became the first woman to officially train a Grand National runner, her Petruchio’s Son finishing 11th in 1973 behind Red Rum. 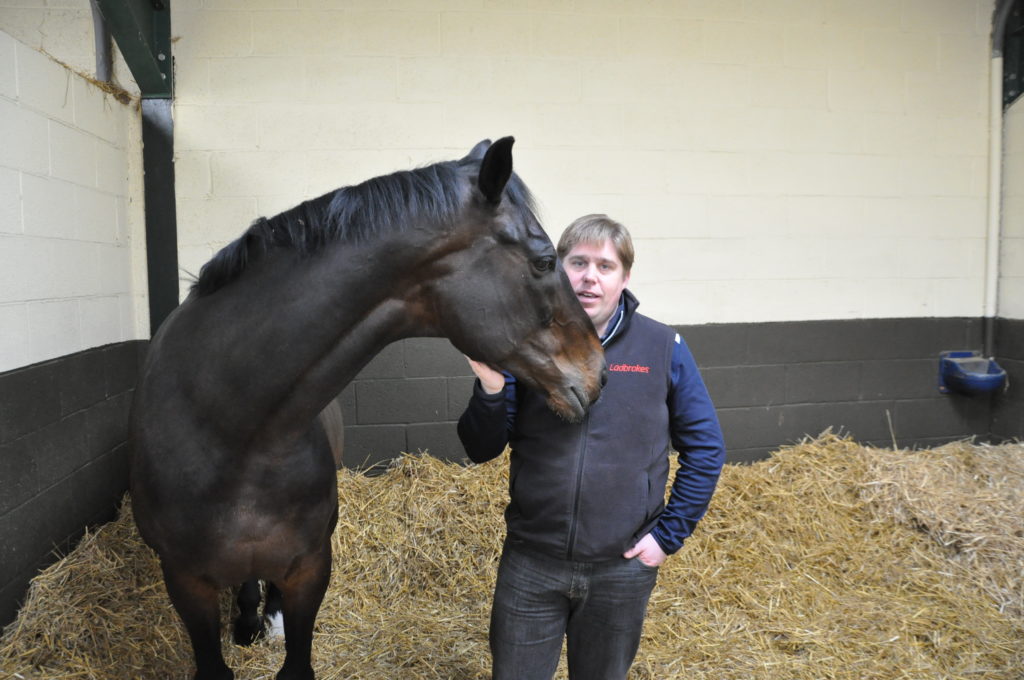 The Skeltons met by chance when Grace, then a 19-year-old university student, was asked by Paul Nicholls to chaperone his young daughter Megan at the races. At some point during the afternoon Dan, who was assistant to Nicholls, bought the ‘babysitter’ a prawn sandwich and their future was unwittingly sealed. Grace says:

“My father and grandfather had racehorses, but my allergy means I don’t ride. When Dan started his own yard I ran the office and have supervised that ever since, but I have long had an interest in breeding. I’m a bit of a nerd in that I love learning. Law represented a challenge.

“The opportunity to buy Dink could not have come at a better time, because we have the racing yard in place down the road and the stud was ready to accommodate a stallion and mares. Our daughter Florence is now seven and so I have a bit more time on my hands to pick up on this new project and run with it.

“It’s an exciting development for us as a family and as a business, and we feel Dink represents a really good addition to British breeding and the stallion ranks.

“It is also good timing in terms of the challenges which have arisen from Brexit and the additional paperwork involved in moving horses. The VAT bonds involved when sending mares abroad makes a stallion based here more attractive.”

Dink and his Spanish background may not be familiar to breeders in Britain and Ireland, but his late sire Poliglote is no stranger. A son of Sadler’s Wells, Poliglote finished second to Celtic Swing in the 1995 Prix du Jockey-Club and went on to sire top-grade winners on the Flat and over jumps, none better than his Prix de l’Arc de Triomphe victress Solemia and the Queen Mother Champion Chase winner Politologue.

Don Poli and Top Notch have been other headline jumpers by Poliglote, and while Dink did not match Solemia’s level on the Flat he won seven races in Spain, including the 2,000 Guineas before finishing third in the Spanish Derby. He retired to stud aged eight and will stand at Alne Park Stud at a fee of £3,000.

Grace says of Dink: “A lot of good jump stallions go through their career without siring Graded winners, yet he’s had four successful foals from eight runners, including a Grade 2 winner over fences who is now Grade 1-placed.” 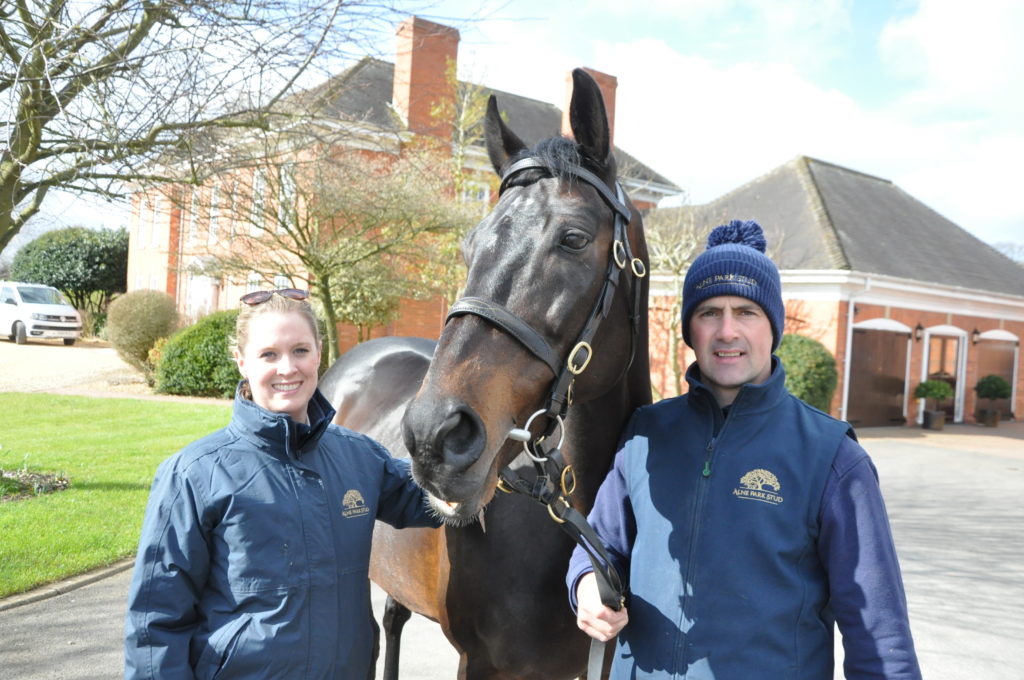 Is this not just a private enterprise in which the new recruit has been bought in to cover mares owned by the family and friends. “Absolutely not,” she says emphatically. “We are serious about the commercial aspect of doing this. There is no reason why the British breeding industry cannot be stronger, it just requires a will. Dan and I have never entered into any aspect of the equine world half-heartedly.

“It has been in the back of our minds for some time that standing a stallion is something we wanted to do, and to create a system where you can go from start to finish by breeding, raising, breaking in and then racing horses. If you race a mare from here and you want to retire her then she can stay on the stud to produce foals.

“Dan is one of the world’s most enthusiastic people, and he is taking a keen interest in Dink, but he is absolutely content to let me and Nick get on with this side of the business. He has his hands full with the racing yard, and while I would be a fool not to tap into his expertise he is leaving the decisions to us.”

If Grace’s husband receives five stars for enthusiasm, stud manager Pearce is not far behind, and when it comes to multi-tasking there is no one finer.

A former point-to-point rider, he was nicknamed Dijon for his keen-as-mustard attitude by changing tent colleagues. They included the current National Stud director Tim Lane, who has been a source of advice for Pearce.

His other roles include training pointers, being head of breaking and pre-training at Skelton’s racing yard and now clerk of the course at a new point-to- point venue nearby called Shelfield Park. It opens for the first time, albeit behind closed doors, on April 11.

Pearce says: “I was very lucky to spend ten years in Kent working for Simon Tindall, who bred and raced [the dual Grade 1 Cheltenham Festival winner] Simonsig. I trained his pointers and produced his young stock, which gave me an interest in breeding and pedigrees. He had a lovely mare called Ronaldsay, who lived at Stowell Hill Stud and produced Gale Force Ten, in addition to some very good jumping mares.”

So the team is in place, the stud is open and the stallion’s profile has just risen a notch with Nube Negra’s fine run at Cheltenham, but what does Dan’s former boss and mentor Paul Nicholls think of this curious diversification?

“Oh,” says Dan, “Paul has a Presenting mare which he’s sending to Dink.” 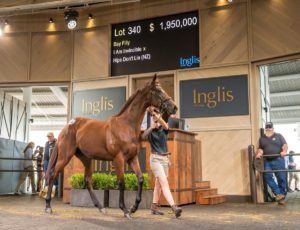