Barry Hills signs off with a double
Stories

Dabirsim sings out loud for Silence

Sunday Silence dominated Japanese breeding throughout his phenomenally successful stud career, and now his sons seem to have things similarly sewn up there. However, he has been given precocious few chances to prove his merit as a sire of sires in the other major racing nations.

The few Sunday Silence stallions, though, who have been sent abroad have generally done very well, notwithstanding the fact that they have generally been afforded scant opportunities by mare-owners.

However, that still hasn’t come to pass to any significant extent – but that could all change henceforth, following Dabirsim’s emergence as a two-year-old of exceptional promise.

The Prix Morny (first run in 1865, the year after the course’s founding) has long been one of Europe’s top juvenile races, its past winners including such champions as My Swallow, Blushing Groom, Machiavellian, Arazi, Zafonic, Johannesburg, Divine Proportions and last year’s winner Dream Ahead.

By taking the race in effortless style on Sunday, the Christophe Ferland-trained Dabirsim looked as if he deserves to be mentioned in the same class. He looks set to advertise the claims of his sire Hat Trick and thus the merit of Sunday Silence sires in general.

Hat Trick, a dark brown Japanese-bred son of Sunday Silence from the Lost Code mare Tricky Code, was a Grade One winner in his homeland as well as in Hong Kong (where he landed the HK Mile in 2005). Dabirsim is one of three winners to have emerged so far from his first crop, conceived in America at Walmac Farm in Kentucky, where he stands for $6,000.

His victory could not have come at a better time for the team at Haras de Grandcamp which consigns a half-sister to the Morny winner at Arqana’s August Sale on Thursday. The February-foaled filly is by one of France’s leading sires, the Haras du Logis-based stallion Slickly, whose son Meandre won the Grand Prix de Paris in July. 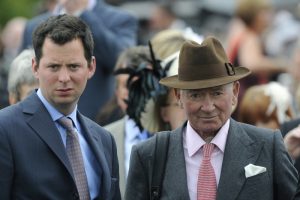 Up Next
Barry Hills signs off with a double