By The Owner Breeder staff 09 September 2016

Doncaster’s oldest surviving race has thrown up some exciting finishes in recent years belying it’s nature as one of the longest races in the Flat racing calendar, with the two mile and two furlong trip one of the most arduous at stakes level.

This year’s 250th renewal wasn’t to disappoint in conjuring up a nail-biting finish. The globetrotting seven-year-old Sheikhzayedroad got his just rewards in the days feature after a series of creditable performances for trainer David Simcock.

Lonsdale Cup-winner Quest For More ensured there was no hiding place setting honest fractions from the front under George Baker. Sheikhzayedroad was positioned in a handy third under Martin Harley, while Irish-raider Clondaw Warrior was held up for his usual late burst.

The leader quickened the pace on the turn in taking two to three lengths out of his seven rivals. Once pushed along with two furlongs to go he found more but all the while Sheikhzayedroad, who travelled well to the outside of Burmese came with a sustained challenge inside the final furlong to wear down the favourite getting up by a nose at the post.

Harley has developed a fine association this year with the seven-year-old gelding, scoring twice in just five outings. The Donegal-born jockey last tasted Group success with another Simcock-trained individual in the shape of miler Breton Rock.

“He’s run some very good races this year, fair play to the old boy he’s been around and keeps producing the goods,” reflected Harley. “He is a little bit quirky but by god he’s tough and he put his head in the right place at the right time.”

Sheikhzayedroad has very much been a standard bearer for his Newmarket yard in recent times with trips to Dubai in March having been on the agenda for the last three years. The son of Dubawi will no doubt be heading east once more next year but for now enjoys one of his biggest successes on these shores.

Simcock said: “He’s been consistent all his life, he’s an old warrior we absolutely love him to bits at home.

“We keep him fresh, he takes no training and he’s slow as a hearse at home but he’s very very special to the yard.”

He’s been consistent all his life, he’s an old warrior we absolutely love him to bits at home

Earlier in the afternoon, the Roger Varian-trained Spangled claimed her first win at Group level in the Sceptre Stakes over seven furlongs.

The Cheveley Park-owned filly was held up by Andrea Atzeni but was delivered with a strong challenge on the rail in the final furlong to get up by a neck from runner-up Mise En Rose.

The Doncaster fraternity were treated to a flying dismount after Ardad returned to form in the Group 2 Flying Childers Stakes for Frankie Dettori. The son of Kodiac disappointed in his last two runs after running out an impressive winner of the Windsor Castle Stakes at Royal Ascot back in June.

After travelling strongly just behind the leaders, Dettori produced the colt with a sustained run inside the final furlong to win going away by just under a length. 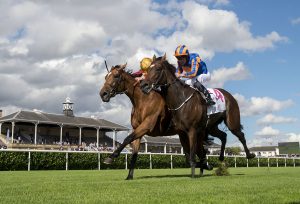 Up Next
Simple Verse swoops late in Park Hill