On the back of notching the 1,000th win of his riding career earlier this week, Paddy Brennan was all smiles again at Haydock Park on Saturday.

The horse that he has developed a close affiliation with in the last few years, Cue Card, went on to secure his third Betfair Chase in four years and did so in emphatic style.

The leader under champion jockey Richard Johnson appeared to set a decent pace in the conditions. Cue Card took closer order travelling well with just under a circuit to go, and a big jump at the 12th brought him to within half-a-length of the Mark Bradstock charge.

As former winner of the race Silviniaco Conti began to feel the pinch back in third, it was left to the two market leaders to battle it out into the final half-mile.

Brennan edged his mount ahead on the turn into the home straight and a spring-heeled leaped at the fourth last saw him draw on. He extended his advantage over his main rival over the final three fences to score by 15 lengths at the winning post.

No doubt a week that will live long in the memory of the 35-year-old rider, he has now partnered Cue Card to four of his seven Grade 1 wins.

One of those was this very race last year. It’s the first of three races in the £1 million bonus offered by the sponsors should he clinch the King George VI Chase and the Gold Cup in March, a feat he was so close to pulling off last season.

“It’s unbelievable, I haven’t slept a wink since Wetherby because I felt the horse didn’t show everyone what he could do,” reflected Brennan.

“I hacked him to the start today and I knew he was back. I was there a bit soon but I just knew I was riding for a man who gets his horses extremely fit.”

The son of King’s Theatre remains at the height of his powers even at the veteran age of 10. It was six years ago that he burst into the limelight when winning the Champion Bumper at the Cheltenham Festival as a 40/1 shot.

Since then, he has gone on to assert himself as one of the best staying chasers around.

Tizzard said: “In a top-class field he absolutely sluiced up today.

“We schooled him this week and he jumped beautifully. It was textbook stuff, he sat and had a lead and made it look so easy.”

Earlier in the afternoon, the Dan Skelton-trained Ch’Tibello caused a small upset in the Betfair Price Rush Hurdle over two miles.

The five-year-old gelding was well positioned in a tactical affair and kept on strongly over the last two flights to gain an unassailable advantage.

Champion hurdle runner-up My Tent Or Yours could not breach the deficit on ground that may not have suited, and had to settle for third behind Melodic Rendezvous. 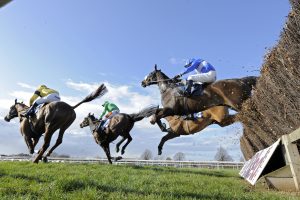 Up Next
Five series to boost northern jumps