The name's the same
Stories

Cry out for more success

By The Owner Breeder staff 06 September 2011

Success brings success. A perfect current example of this is the ever-burgeoning stud career of Street Cry.

After carrying Godolphin’s colours to victory in the 2002 Dubai World Cup, the Irish-bred son of former Dalham Hall Stud stalwart Machiavellian inevitably attracted a good book of mares when he retired to join the Darley roster in America.

Once it became clear that his first crop had included a galaxy of stars including the mighty Zenyatta, the Breeders’ Cup Juvenile and Kentucky Derby hero Street Sense and the top-class Californian sprinter Street Boss, he naturally began to be favoured with an even higher class of mate.

Street Cry’s current batch of two-year-olds, many of whom are in the Godolphin string, are therefore an eye-catchingly patrician bunch. And they are now starting to look as if they will be as good as their pedigrees suggest.

Among Godolphin’s young Street Crys are Discourse (winner of the Group 3 Sweet Solera Stakes and bred on the same cross as Street Sense, out of a Dixieland Band mare), Minidress (a son of the 2006 Musidora Stakes winner Short Skirt, and winner of a Newmarket maiden on her only run to date), Anjaz (another unbeaten maiden winner, and a daughter of the impeccably-bred Playful Act, a Group One-winning half-sister to Nathaniel) and Lyric Of Light (a daughter of the Listed-winning Green Desert mare Suez, and winner of a Newmarket maiden first time out in the last week of August).

The most recent Street Cry two-year-old to win on debut for Godolphin is Oscan, successful at Leicester on Tuesday. He is a half-brother to St Leger winner Mastery and Gran Criterium winner Kirklees.

Of the Street Cry two-year-olds in other stables, the most impressive to date has been the Washington Singer Stakes winner Fencing, a son of Lawman’s Prix de Diane-winning half-sister Latice. Fencing is trained for his breeder George Strawbridge by John Gosden and has been quoted at 16/1 for next season’s 2,000 Guineas. 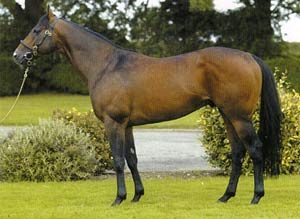 Up Next
The name's the same