Milestone achieved by jockey at Goodwood on Sunday

Jockey Jim Crowley posted the 2,000th victory of his career over Flat and jumps when he guided the Marcus Tregoning-trained Modmin to success in the mile novice stakes at Goodwood on Sunday.

His landmark achievement comes just a week after recording four victories during the Friday of York’s Ebor Festival and in a season where he has landed a number of top races including the Sussex Stakes on Mohaather.

Crowley’s career as a jockey began in the National Hunt sphere where he amassed a total of 253 winners, with his biggest success over jumps coming when he landed the Grade 3 Sandown Hurdle with Ungaro.

Since making the decision to ride exclusively on the Flat, Crowley was crowned champion jockey in 2016 and his success at Goodwood now means he joins colleagues Frankie Dettori, Ryan Moore, Joe Fanning and Jamie Spencer having ridden 2,000 winners in Britain.

He became Sheikh Hamdan’s retained jockey in 2016, taking over from Paul Hanagan, and has secured a number of big victories in the owner’s silks on a number of horses including talented sprinter Battaash.

On reaching the milestone, Crowley told Great British Racing: “I never dreamed of riding this amount of winners in my career, but it’s fantastic to have done so and to be joining some racing greats in reaching the landmark.

“When I started off as a jump jockey, particularly when I was with Sue and Harvey Smith in Yorkshire, it was magic up there and I learned so much from them and was such a good time in my life, but at the same time I never in a million years thought I would end up being champion jockey and then going on to ride 2,000 winners.

“It was such a big decision [to switch codes]. I never really got to the heights I wanted to over jumps, I kept getting injured and had my collarbone removed after breaking it for the tenth or eleventh time. I was lucky to have my sister-in-law in Amanda Perrett who had some great horses and showed me fantastic support, as did other trainers and owners.

“I’ve then gone on to win some fantastic races, most notably the Juddmonte International and Coral-Eclipse with Ulysses and all of the wins with Battaash. It has been a great journey, and long may it continue. I’m still hungry and want to ride in and win as many races as I can.”

Angus Gold, Racing Manager to Sheikh Hamdan, also spoke to Great British Racing and added: “Reaching 2,000 winners is an unbelievable achievement for Jim, and even more unique in that it has come over both jumps and Flat.

“He has been fantastic for us over the last four years or so and we have shared many great days as a team. He’s everything we wanted in a stable jockey, and you’d have to say in terms of highlights, the ones that stand out most recently are obviously the superb wins with Mohaather and Battaash.

“But as an example of how good of a jockey Jim is, was a win at Wolverhampton the other week with Daheer who is trained by Owen Burrows. He is considered a very ordinary horse, but the way Jim rode him to victory was fantastic, and proves it’s not just about the big occasions and why having a stable jockey in Jim is so important to us.

“He’s such a good guy to work with, a very knowledgeable jockey with a great racing brain, who is very thorough in his work and a joy to be around.” 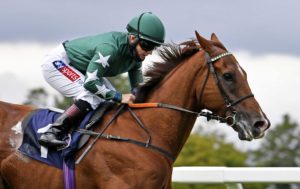 Up Next
Hollie Doyle records five-timer