Tattersalls auction concludes with 538 horses sold for turnover of 12,301,300gns and a clearance rate of 94%

Any Covid induced uncertainty appeared to be a distant memory at the Tattersalls July Sale in Newmarket, which closed on Friday following a three-day run of excellent trade.

A hunger for horses at differing levels of the market from both domestic and international buyers resulted in a clearance rate of 94% – of the 574 horses offered, only 36 failed to find new homes. Those 538 that sold turned over 12,301,300gns in gross sales, more than double that recorded at last year’s ‘Covid-ravaged’ edition, for an average of 22,865gns, which represented an increase of 27%.

Aureum, a winning daughter of Medaglia d’Oro offered in foal to Invincible Spirit by Godolphin during the first session, topped proceedings on a valuation of 220,000gns from Tom Goff of Blandford Bloodstock. In all, the 39-strong Godolphin draft turned over a total of 1,679,700gns, second only to Shadwell Estate Company, whose sizeable draft of 81 realised 1,901,500gns.

Blandford Bloodstock led the buyers list with six bought for a total of 556,000gns.

“The Tattersalls July Sale has long been recognised as Europe’s premier midsummer sale and this week’s impressive set of figures have yet again confirmed its status,” said Tattersalls Chairman Edmond Mahony. “Perhaps more importantly than figures alone, it has also been a sale with a real sense of business returning to something resembling normality. We cannot make meaningful comparisons with last year’s abbreviated and Covid-ravaged July Sale, but this year’s sale has produced a level of trade that compares very favourably with both the 2019 and 2018 renewals and crucially has yet again achieved a remarkable clearance rate in excess of 90%.

“Even in a sale of genuinely vibrant trade from start to finish the penultimate session stood out with an extraordinary 100% clearance rate driven by strong domestic demand mixed with the sort of international participation which has been so encouraging considering the widespread travel restrictions which are still in place.

“Significant consignments from some of the world’s leading owner/breeders including Godolphin, Juddmonte Farms and Shadwell Estates have been as popular as ever and buyers from all over the world have continued to make full use of the Tattersalls live internet bidding platform as well as telephone bidding through our team on the ground.

“All the signs now suggest that we can look forward to returning almost to normal for the forthcoming Tattersalls August Sale and for the market – leading Tattersalls yearling sales which begin at Park Paddocks with the new Somerville Yearling Sale on September 7th.”

Friday’s final session was topped by the sale of classy stayer Laafy for 105,000gns to AGC Bloodstock.

The 101-rated five-year-old has won four times and run Listed-placed for Sir Michael Stoute and will now continue his career as a jumping prospect with trainer Mark Campion.

“He is very nice horse, my son Arthur spotted him and said ‘Dad you need to come and look at this horse’,” said Campion. “He is going jumping and is a very nicely rated horse, he has plenty of ability.

“We will get him home, the team can take a look at him and we’ll make a decision about what to do next, see how he settles in. He is a lovely big horse, we have a small team to own him.”

Recent Thirsk winner King Triton was the other horse to break six figures, selling for 100,000gns to DPA Bloodstock and Grant Tuer.

The gelded son of Invincible Spirit has a progressive look to him, having won his third start at Thirsk last month for Roger Varian to attain a rating of 85.

He is now set to carry the colours of Edward Ware. 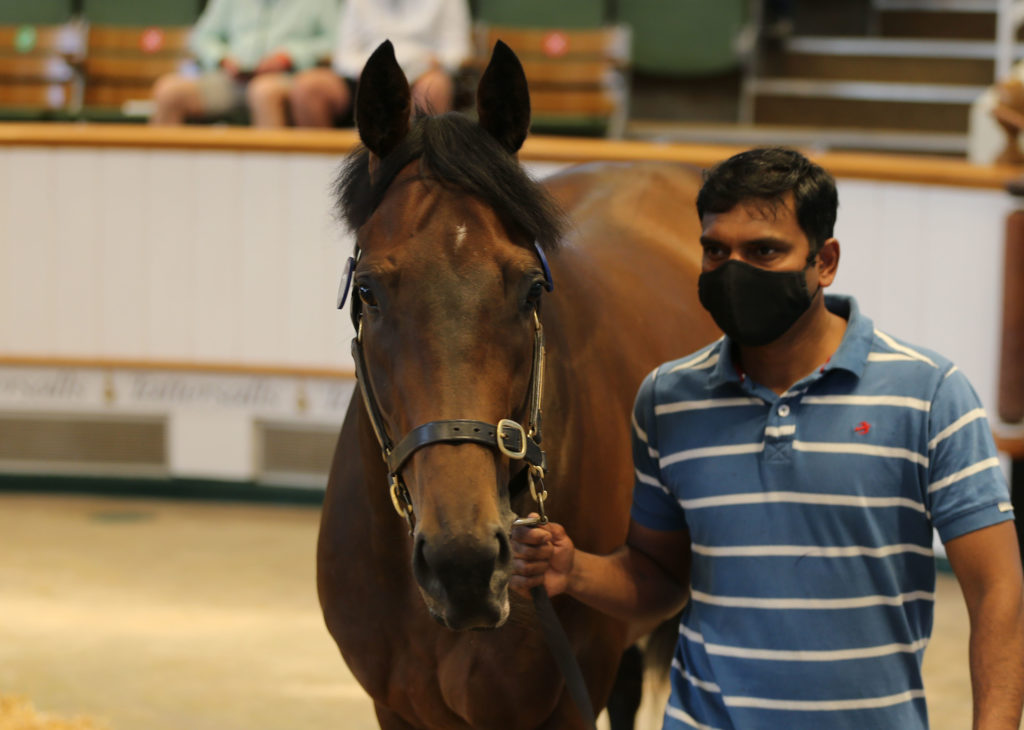 “I had a horse for Edward Ware earlier this season, we won a couple and sold him on, this is to replace him,” said Tuer.

“I liked the form of King Triton’s maiden win, the form has worked out well. Hopefully, we can progress into some nice mile and 1m2f races this summer. We will probably try and go to the Ebor meeting, there is a mile handicap for three-year-olds.”

Ian Williams, meanwhile, is hoping lighting will strike again after going to 88,000gns with Richard Ryan for the Listed-placed Cap Francais out of Ed Walker’s yard.

The five-year-old gelding shares his sire Frankel with Williams’ popular stayer The Grand Visir, a 170,000gns horses in training purchase who ran a fine second on his most recent start in the Listed Coral Marathon at Sandown.

Three-time winner Cap Francais already has plenty of smart form in the book, notably a placing in the 2019 Listed Blue Riband Trial at Epsom, and boasts a rating of 100.

“We have been very fortunate with a Frankel who came from a Tattersalls horses in training sale, The Grand Visir. We love the stallion as does everybody!” said Ian Williams.”He is a horse who has had a good break having come back from Dubai [where he ran three times at Meydan], and looks set to be competitive in a lot of the winter festivals abroad. He could possibly go jumping next spring.

“He is rated 100 and he is capable of running to that level, he should be fun. We now just need to find the right client for the horse.” 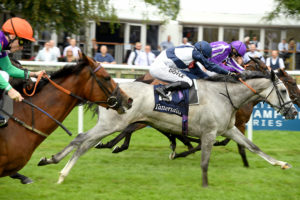 Up Next
Snow Lantern strikes late to claim Falmouth Stakes