Queens of the Turf
Stories

Jeremy Early’s excellent essay on the Ballymacoll Stud foundation mare Country House in the July issue of the magazine highlighted the merits of the family that has produced the recently deceased Hellenic, Golan, North Light and Islington among its 11 Group 1 winners.

Following Sunday’s racing at Greyville in South Africa, there is yet another top-flight winner to add to the list: the two-year-old colt Potala Palace, who won the Premier’s Champion Stakes on the final day of the season. A son of the late Singspiel, he was conceived in Britain to southern hemisphere time then foaled in South Africa.

Potala Palace is out of the Alzao mare Alignment, who raced just four times for Ballymacoll without winning and was bought from the stud’s draft at Goffs’ breeding stock sale in 2005 for €42,000 by Larry Stratton. Country House is the colt’s fifth dam.

There was also South African Grade 1 success for another stalwart of the British stallion ranks, Pivotal, on Sunday.

Amanee, winner of the Thekwini Fillies’ Stakes, is similarly well bred. Her dam Moon Is Up, by Woodman, is a daughter of the great Miesque. The two-year-old filly was bred by Mike de Kock’s principal owner, Sheikh Mohammed Bin Khalifa Al Maktoum. 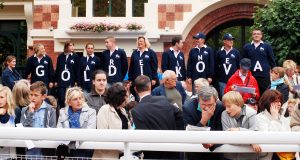 Up Next
Queens of the Turf