Cossack puts rivals to the sword

Britain’s leading hope Cue Card had not been foot perfect before finally falling three out and it was left to last year’s runner-up Djakadam to fill the same position again, with Don Poli in third.

It was a second win in the race for Michael O’Leary’s Gigginstown House Stud, a decade on from War Of Attrition, and a first for both trainer Gordon Elliott and Cooper. Don Cossack, returned at 9/4, was another winning favourite on a torrid week for bookmakers.

It was a moving victory for O’Leary, who had just a couple of horses when winning his first Gold Cup and has now expanded to a three-figure string.

“I am actually so emotional. We have been doing seconds all week. Bryan gave Don Cossack a peach of a ride and for Don Poli to finish third is brilliant.

“It’s very tough to find those horses. We’ve had a few like Weapon’s Amnesty, who won an RSA Chase and got injured. Gold Cup winners are impossible to find. I’ve bought a lot of horses in the past 10 years.”

O’Leary’s string have been sourced from war and wide and Don Cossack, a son of Sholokhov, was bred in Germany by Gestut Etzean.

British-breds may face a numerical disadvantage but they had a great week with Unowhatimeanharry continuing the run of Grade 1 success begun by Blaklion, Ballyandy and Thistlecrack.

Nina Carberry may have steered another hot favourite in On The Fringe to victory in the St James’s Place Foxhunter Chase but all eyes were understandably on Olympic gold-winning cyclist Victoria Pendleton as she continued her new career as an amateur jockey.

“Coming back in, the reception was almost like I’d won which was special,” said Pendleton. “It was an experience I will never forget – it will rank right up there with being in the Olympic Velodrome. How often does someone get to perform in a sporting event like that in front of so many people in such a prestigious Festival? I feel very honoured and very fortunate to be given such wonderful opportunities and I’d like to thank everyone.”

Aidan O’Brien officially oversaw the JCB Triumph Hurdle winner Ivanovich Gorbatov for J P McManus, although the work had been done by the trainer’s son Joseph, who is likely to take out a licence in May.

Britain and Ireland finished with 14 wins apiece to share the Betbright Cup after an epic week that drew a record overall attendance of 260,579. 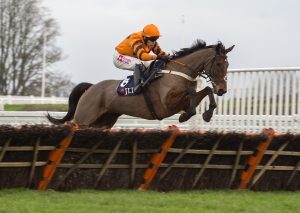 Up Next
Thistlecrack proves different gear