Coroebus maintained the outstanding run of Charlie Appleby on Saturday when leading home a one-two for Godolphin in the 2,000 Guineas at Newmarket.

The homebred son of Dubawi had impressed in a recent racecourse gallop on the Rowley Mile and with some excellent juvenile form in the book, was many people’s idea of an alternative to his stable companion Native Trail. And so it proved.

Sent off the 5/1 second favourite behind Native Trail in a field of 15, Coroebus was always travelling well in the hands of James Doyle, initially in the rear division of the field as his Royal Lodge Stakes conqueror Royal Patronage cut out the early running, attended by Berkshire Shadow and Boundless Ocean. Coroebus was positioned near the back of the field close to the well-fancied Ballydoyle colt Luxembourg on the far side but when asked, moved smoothly into contention alongside that rival as they headed into the dip. Meanwhile, Feilden Stakes winner Eydon was throwing down a challenge in the centre of the track as Native Trail was being wound up by William Buick towards the nearside. Each colt was quickening as they headed into the final furlong but it was Coroebus’ turn of foot that sealed the advantage, propelling him clear at a crucial moment. Native Trail did his best to close the gap but Coroebus was always holding him, ultimately scoring by three-quarters of a length.

Luxembourg, who had been outpaced at a vital moment, stayed on to take third ahead of Eydon in fourth.

It was a fourth 2,000 Guineas win for Godolphin following Mark Of Esteem (1996), Island Sands (1999) and Dawn Approach (2013) and a first for Charlie Appleby. It was also a first British Classic win for jockey James Doyle. 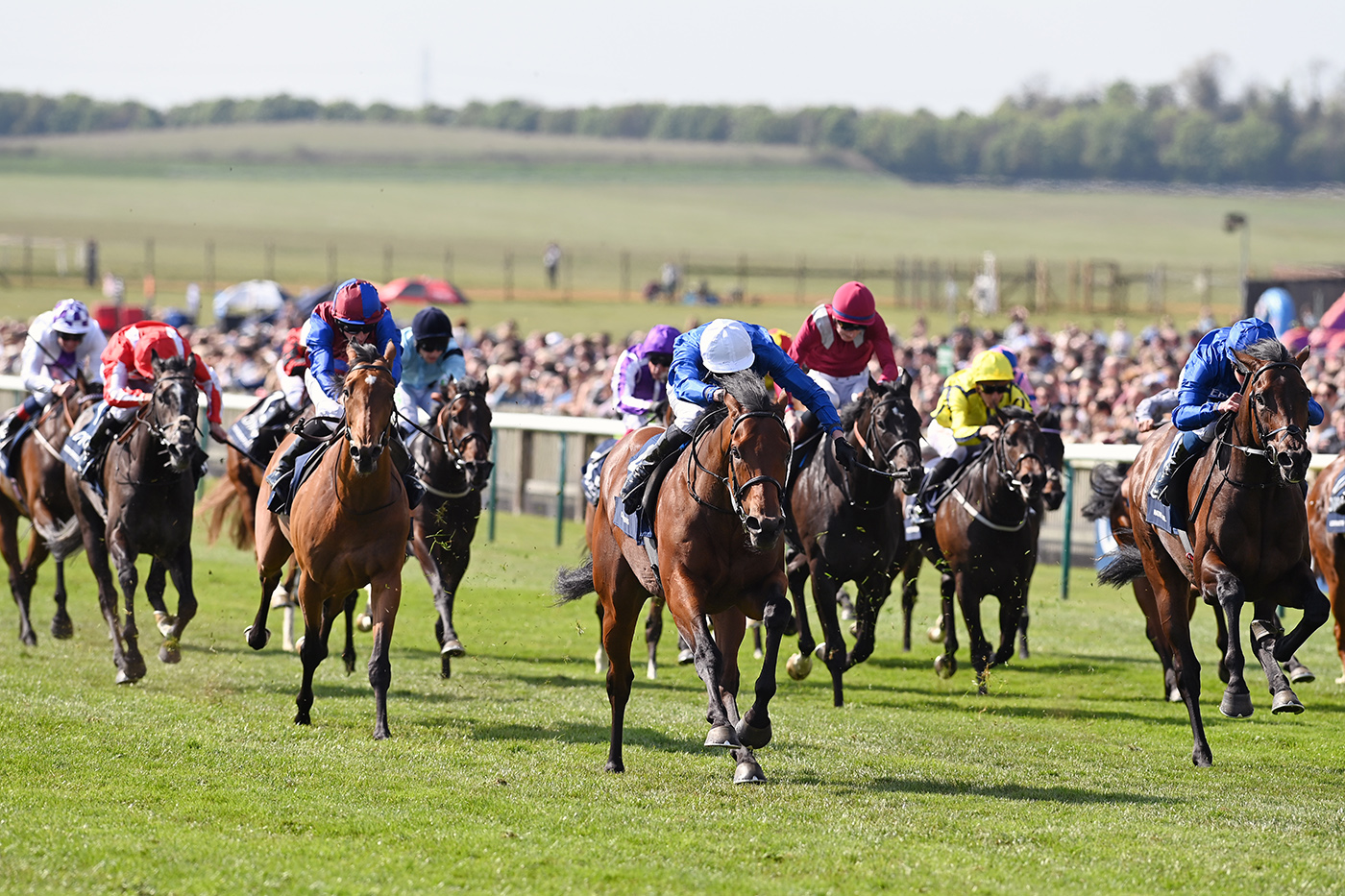 “I feel like I felt in the lead up to the race all the way, to be honest – both those horses at every step took a step forward,” Appleby told Racing TV.

“Native Trail came here and won the Craven and the same morning Coroebus came for a gallop and William said he felt very exciting, but he couldn’t get off Native Trail with what he’d achieved.

“Coming into today I felt we had two live contenders. The draw didn’t worry me. They were good horses racing over a straight line, just keep it simple.

“Like any good horse he has a lot of natural pace and when they have that aligned with the physique you can’t help but get excited about them.”

Doyle added: “He travelled incredibly strongly throughout, there’s no reason to believe he won’t improve from today because he was exuberant through the early part of the race, I just had to bring him back a couple of times.

“I was thinking at halfway ‘this is all going pretty well’, I just thought I’d keep very patient – something joined me quite quick and I just asked him a couple of questions going into the dip and he responded incredibly. If I’d sat a bit longer he’d have been much more impressive.

“This race has been something that has always annoyed me, looking at replays over and over again of Kingman’s Guineas and Barney Roy’s Guineas, and then it goes as simple as it did today.” 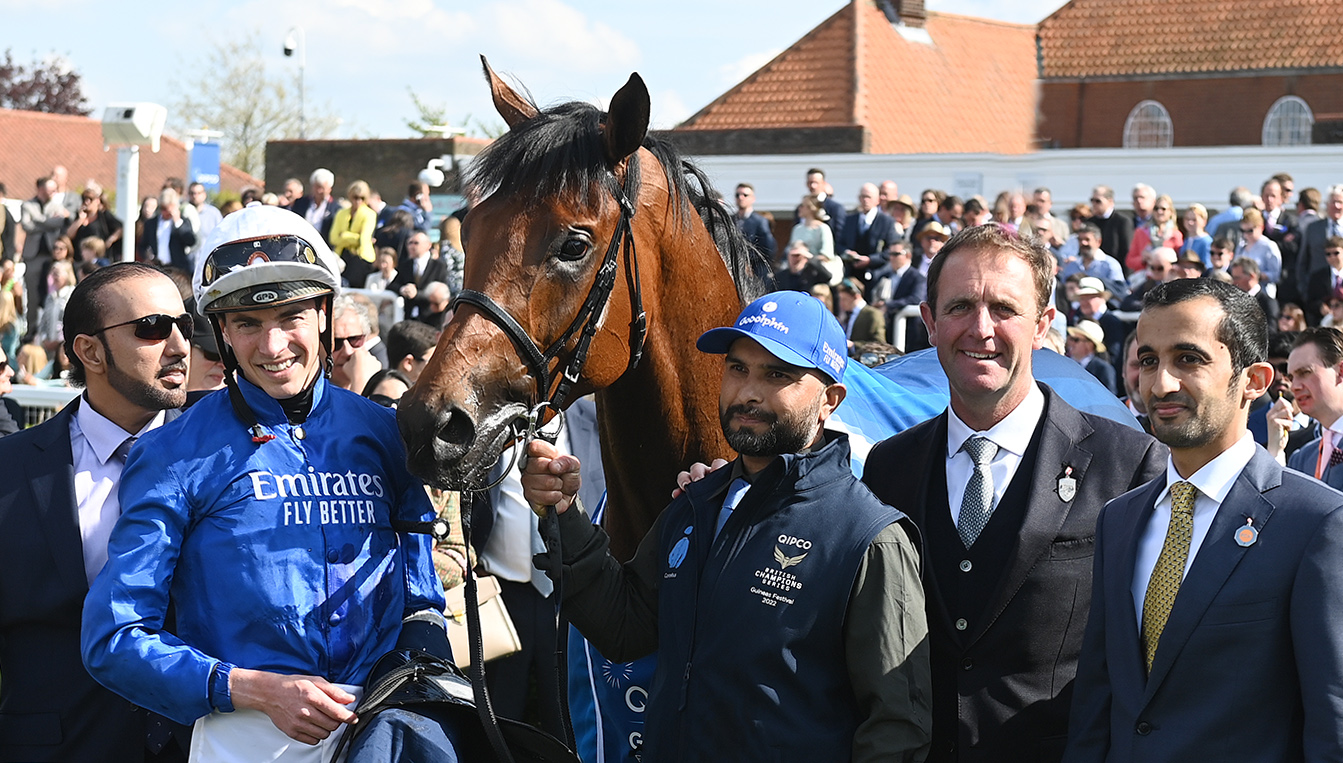 Coroebus was introduced at 10/1 for the Cazoo Derby but is likely to stick to a mile for now and head to the St James’s Palace Stakes at Royal Ascot. Appleby also highlighted the Irish 2,000 Guineas as a target for Native Trail.

However, Luxembourg did his Derby prospects no harm and was duly hardened into 5/2 favourite for the Epsom showpiece.

Now a three-time winner, Coroebus represents one of Godolphin’s most powerful families as a grandson of its blue hen Eastern Joy. The daughter of Dubai Destination won only a Vichy maiden herself but has been a revelation at stud as the dam of six stakes winners from her first six foals.

The most successful is none other than Thunder Snow, a $16.4 million earner for Godolphin by virtue of eight wins, among them two renewals of the Dubai World Cup. By far the best runner sired by Helmet, Thunder Snow today stands under the Darley Japan banner and his first crop are foals.

Eastern Joy’s other foals include Always Smile (2014 filly by Cape Cross), a Listed winner who sadly died young, Ihtimal (2013 filly by Shamardal), the 2013 May Hill and Sweet Solera Stakes winner who also died young, Winter Lightning (2015 filly by Shamardal), the 2018 UAE 1,000 Guineas winner, and Eastern World (2017 gelding by Dubawi), a recent winner of the Mahab Al Shimaal Stakes in Dubai.

Coroebus’ dam First Victory, the 2013 foal out of Eastern Joy, was also a highly talented filly for Saeed bin Suroor who won both her starts at two, notably the Oh So Sharp Stakes. The daughter of Teofilo ran twice more at three but failed to sparkle. Coroebus is her second foal and only winner, and followed by a two-year-old Shamardal colt named Pherenikos.

In turn, Eastern Joy is a half-sister to West Wind, winner of the 2007 Prix de Diane for Sheikh Mohammed, and a granddaughter of Morning Devotion, whose daughter Balanchine came close to Newmarket Classic glory back in 1994 when nosed out by Las Meninas in the 1,000 Guineas. The Storm Bird filly later made amends in the Epsom Oaks, in which she became the first of many European Classic winners for the then fledgling Godolphin operation.

Coroebus becomes the 49th Group or Grade 1 winner for Dubawi and his second winner of the 2,000 Guineas after Makfi and Night Of Thunder. 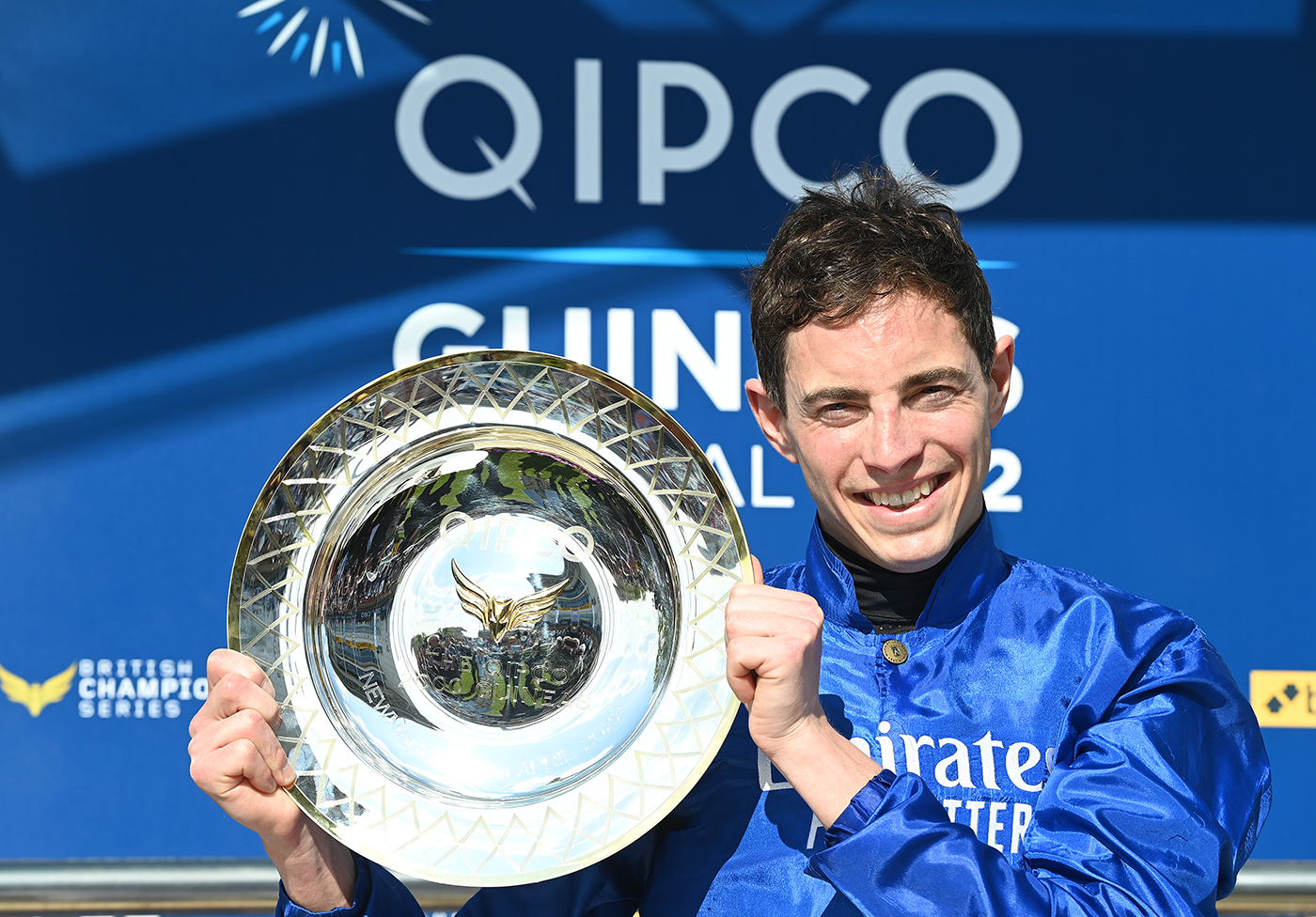 For James Doyle, it was a first European Classic win. Photo – Bill Selwyn 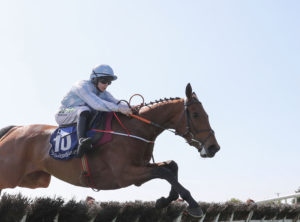 Up Next
Honeysuckle makes it 16 straight wins at Punchestown