Ruler Of The World became the fifth winner of the Derby at Epsom for the Coolmore team of owner-breeders and the fourth for his trainer Aidan O’Brien when leading home the fast-finishing Libertarian and Galileo Rock on Saturday.

Ryan Moore was aboard the winner to claim his second Investec Derby victory, while Joseph O’Brien finished best of the other four Ballydoyle runners in fourth on Battle Of Marengo.

Following the success of the Andre Fabre-trained Pour Moi in 2011 and Camelot last year, Messrs Magnier, Tabor and Smith have now combined for a hat-trick of wins in the race which is the focus of their attention all year round. In the last five renewals of the Derby, 12 of their horses have reached the frame.

It all started, of course, with Galileo’s victory in 2001 – a first Derby victory for Sadler’s Wells which was followed 12 months later with the triumph of High Chaparral. In getting the ball rolling for the team at Epsom, Galileo has gone on to be an extraordinarily influential force in the pedigrees of recent Derby contenders.

His son New Approach won the race in 2008 and was responsible for the well-beaten favourite Dawn Approach, who blew his chances in the first few furlongs with an uncustomary display of fly-leaping which bordered on bolting.

While the 2,000 Guineas winner could play no part, Galileo’s son Ruler Of The World took charge, with another son of New Approach making eye-catching late headway to grab second, with yet more Galileo colts – Galileo Rock, Battle Of Marengo, Mars and Flying The Flag – finishing third, fourth, sixth and eighth respectively.

With such an extraordinary level of success maintained not just on the racecourse but in the breeding shed over the years, it’s no surprise to learn that Coolmore has a grading system for its horses.

John Magnier explained after the Derby, “All our horses are rated by their pedigrees and rated as individuals. Sue [Magnier] decides on the names and [Ruler Of The World] had made his way to the top of the order. Sometimes we get it right and sometimes we get it wrong – we’ve had a lot of bad American presidents.”

It would be wrong not to acknowledge the part played by Kingmambo in the last two Derbys – he is broodmare sire of both Camelot and Ruler Of The World – and the dam of the latter, Love Me True, has already produced a multiple Group 1 winner, Duke Of Marmalade, to the late Danehill. She has been covered again this year by Galileo.

Magnier added, “Ruler Of The World’s dam was on her way to the breeding shed to be covered by Fastnet Rock and I rang Aidan and said, ‘Is he any good?’, and Aidan said, ‘Oh, he is’, so we sent the mare back to Galileo.”

Ryan Moore, who rode Lines Of Battle for the Coolmore team in this year’s Kentucky Derby instead of staying at home to ride in the 2,000 Guineas, is often reticent in his post-race appraisals but he hit the nail on the head when summing up the importance of the Derby, not just to Coolmore, but to the breeding industry in general.

He said, “The whole thoroughbred breed hinges on the Derby, it’s what racing is about for everyone working in stables and studs.” 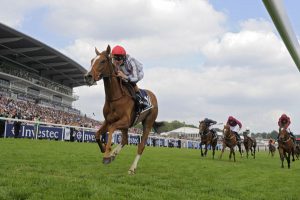 Up Next
Homebred Talent shines in the Oaks