Beach Frolic is likely set for a date with Coolmore’s perennial champion sire Galileo after MV Magnier stretched to 2.2 million guineas to secure the dam of dual Group 1 winner Palace Pier at Tuesday’s session of the Tattersalls December Mares Sale.

An opening bid of a million guineas from Newsells Park Stud’s Julian Dollar illustrated the high regard in which prospective buyers held the daughter of Nayef and it wasn’t long before Japanese operation Northern Farm and Rob Speers, Ibrahim Araci’s advisor, entered the fray.

While there were bids fielded via the Tattersalls online platform at 1.8 million and 2.1 million guineas, it was Magnier who walked away with the mare when he placed the final bid of 2.2 million outside by the ring at Park Paddocks.

Beach Frolic was offered by Highclere Stud – who owned the mare in partnership with Floors Farming – in foal to exciting young sire Blue Point with a breeding record that has so far yielded two winners.

Her shining star is of course none other than the John Gosden-trained Palace Pier who captured both the Group 1 St James’s Palace Stakes and Group 1 Prix Jacques le Marois this year.

MV Magnier said: “I’d say she’d be one for Galileo. She’s a lovely mare who has a bred a very special horse, an exceptional horse in Palace Pier. And her Highland Reel colt, who was bought by Jamie McCalmont for 320,000gns in October, was a lovely yearling. She’s a special mare and they don’t come up very often.

“Incredible the involvement from Floors and it is great to hear that they are keeping some mares, let’s hope they have plenty of success again. I would also just like to say what an amazing job Lady Carolyn Warren has done all the way through with this mare.”

👑 The dam of star miler Palace Pier, Beach Frolic was sold by Highclere Stud with a covering to @DarleyEurope‘s Blue Point.#TattsDecember | @JakeJWarren pic.twitter.com/XsoMMbaFtG

It was with the purchase of Miss D’Ouilly for just 50,000gns by John Warren back at the 2000 edition of the December Mares Sale that Highclere began their involvement in this family.

Subsequent talented performers to have emerged include the Grade 3-winning Miss Caerleona, dam of Miss Coronado and Karen’s Caper, and Night Frolic, the dam of Beach Frolic, who produced Group 2 winners Bonfire and Joviality.

The death of part-owner Duke of Roxburghe last year influenced Highclere’s decision to sell and Warren said: “It was a little bit of coming to the end of an era, we have been so closely involved with Floors for 35 years.

“This whole week has been really poignant, the wrapping up of most of it, but I am really pleased that the Duchess and her son George are carrying on with a few nice mares. We had a very close friendship with the Duke, it is a bit beyond the horses.”

Earlier in the session, the ring played host to the part dispersal of stock from the Duke’s Floors Stud and was topped by Deep Inside, a Redoute’s Choice half-sister to Group 3 winner Chrysanthemum at 425,000gns.

In total the seven mares, who were offered by Lord and Lady Lloyd-Webber’s Kiltinan Castle Stud, sold for an aggregate of 1,308,000gns.

Reflecting on the poignant dispersal George Innes-Kerr, the Duke’s son, said: “It was sad but exciting at the same time. Dad would have been extremely proud, particularly of the job that the staff did – they turned out the mares looking immaculate.

“We’re keeping the name going and Dad’s legacy with Attraction. Attraction is carrying a filly – he would be over the moon with that. It’ll be nice as we’ll be able to just jump in the car and visit them.”

Sonaiyla and Kurious each fetch 900,000gns

Prior to Beach Frolic’s starring turn it was the Dark Angel mare Sonaiyla who headed trade as the session moved into early evening when purchased by Fiona Craig of Moyglare Stud for 900,000gns.

It marked an excellent return on the €110,000 outlay by Ennistown Stud and Paddy Twomey at last year’s Goffs November Sale.

Since purchasing the four-year-old, who hails from the Aga Khan’s family of Sinndar, the filly has progressed through the ranks to win a Listed contest and finished third to Glass Slippers in the Group 1 Flying Five Stakes.

Craig said: “It is basically a need for speed. She has something that we find hard to breed, and there is that Group 1 placing.

“She is a pretty filly, too, and she is an outcross, she can go to anything – Galileo, Frankel, Dubawi, Kingman, Sea The Stars. Hats off to Paddy, he did some amazing job. It is that Group 1 5f placing which is the key to it.”

Another to make 900,000gns on Tuesday was Hot To Trot Racing and Whitsbury Manor Stud’s Group-3 winning sprinter Kurious.

Bought by Charlie Vigors on behalf of a British-based investment group, the daughter of Kuroshio is a half-sister to the Group 1 winners Tangerine Trees and Alpha Delphini.

Vigors added: “She is for the same clients who sold the Lope De Vegas well at the October yearling sales. We will have a think about stallions in the spring. We are delighted to get her.”

Charlie Vigors “amazed and somewhat surprised” to have been able to buy Kurious at the #TattsDecember Mares Sale, a 900,000gns buy by @HillwoodStud from @WhitsburyManor. pic.twitter.com/qD2npOpsRN

A year after attempting to buy Time Saver at last year’s edition of the sale, Richard Brown of Blandford Bloodstock made sure he secured the half-sister to Timepiece and Passage Of Time for 850,000gns.

It was Aquis Farm who had paid 750,000gns in 2019 and on Tuesday they offered her in foal to Juddmonte’s Kingman through Genesis Green Stud.

Brown said: “We went quite a long way on her last year, when she was the standout of the Juddmonte draft. So we’re very pleased to get her today.

“She’s for a partnership and will live at Fittocks Stud. It’s a wonderful pedigree, she’s a half-sister to two Group 1 winners and there was another Grade 1 winner out of it the other day [Viadera] under the second dam. And then you have Time Test in there too – I have a lot of time for him as a stallion.”

Time Saver sells to @BlandfordBldstk for 850,000gns at the #TattsDecember Mares Sale.

From the @JuddmonteFarms family of Timepiece, Time Test, Twice Over & Viadera, Time Saver was sold by Genesis Green Stud with a Kingman covering. pic.twitter.com/yi1tSpLdCX

Another operation to invest in the Tattersalls market was Sheikh Fahad Al Thani’s Qatar Racing and through Racing Manager David Redvers they captured Dulkashe for 525,000gns.

An 11-year-old daughter of Pivotal, the winning Dulkashe is already the dam of Coronation Cup hero Defoe and was offered by Miltown Park Stud in foal to Churchill.

“We’re buying a group of mares to send to Kameko, Zoustar or an outside stallion,” said Redvers. “It’s a real possibility that she could go to Kameko. We’ll sit down and work it out. Daughters of Pivotal who have thrown a Group 1 winner are quite rare.”

David Cox of Baroda Stud got the better of Arthur Hoyeau at 520,000gns to secure Lady In Lights, a half-sister to the Group 1-winning pair Magna Grecia and St Mark’s Basilica who was offered in foal to No Nay Never.

The daughter of Dansili was purchased by Cox on behalf of an undisclosed client and he revealed: “She will board at Baroda. No Nay Never is a great sire and we look forward to see what she produces and selling [her stock] as a yearling.” 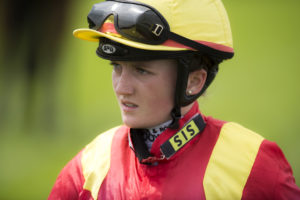