Conor on the mark with Listed double

Conditional shows a dab hand in mares’ races at Cheltenham

The increasing number of trainers targeting mares’ National Hunt races would do well to consider booking Conor Shoemark after the young conditional notched a brace of Listed victories at Cheltenham on Thursday.

Shoemark, who claims 5lb, leapt straight to the fore on the Don Cantillion-owned, -trained and -bred As I Am, who made all to win the opening TBA Novices’ Mares’ Hurdle, recording his fourth victory aboard the one-eyed daughter of Old Vic. As I Am also gained a Listed win over hurdles at Newbury in November and was subsequently second at Haydock, again in a Listed contest, just before Christmas.

Next on the Cheltenham card was the EBF/TBA Mares’ Novices’ Chase Final, in which Shoemark partnered Me And Ben for Fergal O’Brien. Bustled into the lead at the second-last fence, the seven-year-old Revoque mare rallied gamely up the Cheltenham hill to see off a challenge by Possibly Flora, eventually passing the line two lengths to the good.

A winner at Cartmel last August, Me And Ben also has a point-to-point success to her credit and has been placed on seven occasions for her owner/breeder Michael Fahy. She is out of Rare Gesture, an unraced half-sister to Wichita Lineman and Rhinestone Cowboy.

The OLBG.com Mares’ Handicap Hurdle was the third Listed race of the day and went the way of Shantou six-year-old Polly Peachum, whose dam is a sister to Cheltenham Gold Cup and Hennessy hero Denman. 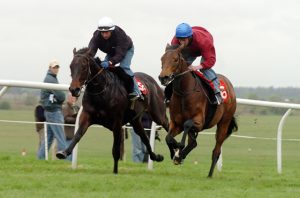 Up Next
Appeal against AI ban dismissed