Plaid Maid has already provided the Oaksey and Bradstock families with a tremendous flagbearer in last season’s Hennessy Gold Cup hero Carruthers and his younger half-brother Coneygree looks to be another star in the making following an all-the-way win in the Grade 2 Neptune Investment Management Novices’ Hurdle at Cheltenham on Sunday.

Bred by Lord John Oaksey, who died in September, the five-year-old jumped off positively under Mattie Batchelor and, despite some classy-looking opposition, dominated the race, his only small mistake a peck on landing after the penultimate flight. Landing safely over the last he summoned up another burst of energy to run home strongly in the testing conditions, scoring by seven lengths from the Gordon Elliott-trained Bondage.

Coneygree’s trainer Mark Bradstock, who is married to Lord Oaksey’s daughter Sara, indicated that his charge is very much a chaser in the making and will have a break now before perhaps returning to Cheltenham in the new year. The son of Karinga Bay has now won three of his four starts, including a Uttoxeter bumper on debut followed by his 20-length maiden hurdle win at the same track earlier this month.

In June, Lady Chicky Oaksey received the TBA Broodmare of the Year award for Plaid Maid, a daughter of Executive Perk who won five races for Bradstock in the colours of Lord Oaksey. She died in 2009 but her final foal, the Overbury four-year-old Maid Of Oaksey, is now in training alongsider her half-brothers. Carruthers, a nine-year-old by Kayf Tara, was Plaid Maid’s first foal and his seven victories also include the Grade 2 Reyonoldstown Novices’ Chase. 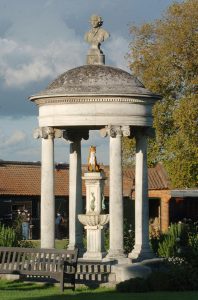 Up Next
Tattersalls joins forces with Osarus