Coneygree gearing up for return

The nine-year-old has been absent for ten months

A little under 18 months ago, Coneygree made history by becoming the first novice since Captain Christy in 1974 to win the Cheltenham Gold Cup.

After that momentous day for trainer Mark Bradstock and wife Sarah, jump racing fans have only seen the nine-year-old gelding once on the racecourse.

This was at the start of November when he pulverised just two opponents by 25-lengths in the 3m Listed Future Stars Chase at Sandown Park.

It was revealed subsequent to that victory that the son of Karinga Bay had suffered a foot problem which ruled him out of the Hennessy Gold Cup later that month, a race his half-brother Carruthers won in 2011 for late owner-breeder, Lord Oaksey.

Then in mid-December it was discovered following a trip to a specialist vet in Newmarket that he had damaged his hock which although not career-threatening, ruled him out not only of a bid to retain his Gold Cup crown but the rest of 2015/2016 jumps season.

With an inflated string of 16 at his Letcombe Bassett base, Bradstock has been pleased with his stable star’s recovery and eagerly anticipates his return to the racetrack.

“He’s basically been here all summer and quietly recuperating at the same time,” said Bradstock.

“During the middle of the summer he was out three days of the week and the other two in the mornings he had quiet exercise to start with.”

The Bradstock’s and owners The Max Partnership are still deciding on the best option as a starting point on the road back to Cheltenham in March. With the £1 million Jumps Triple Crown up for grabs this season, the Betfair Chase at Haydock Park on November 19 is one possibility despite the stable’s poor record at the Merseyside venue.

“We jumped him again the day before yesterday and he jumped absolutely super. We’ve got three choices to start him off, the Charlie Hall Chase, the Betfair Chase or the Hennessy. It will be very ground dependent so who knows what the conditions are going to be like in a months or so time,” continued Bradstock.

“We might actually give him a racecourse gallop. I was talking to Keith Ottesen the clerk of the course at Chepstow, he was desperate to see whether we’d take him there for a spin but we’ll see and make our minds up nearer the time.”

For Nico de Boinville, who was formerly known as Sprinter Sacre’s work-rider he is hopeful that his ally retains all of the ability which saw him remain unbeaten in five starts over fences.

Not only was the Gold Cup win the biggest of the young rider’s career as it would be for any jockey, but it helped to consolidate his position as a top-notch pilot.

de Boinville said: “He feels in great nick and seems to be schooling very well at the moment, so fingers crossed it’s all systems go.

“He feels like he did during that fantastic season.” 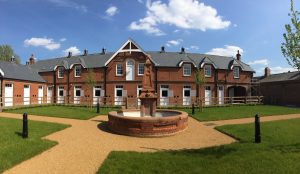 Up Next
£15 million Heritage Centre opens in HQ