Victory for the Bradstock family in Cheltenham’s blue riband

Not since Captain Christy in 1974 has a novice won the Cheltenham Gold Cup but any lingering doubts over the suitability of the race for Coneygree were emphatically dispelled with one of the most thrilling performances ever witnessed in steeplechasing’s blue riband.

Sent to the head of the 16-strong field from the off, the Mark Bradsotck-trained eight-year-old dominated the race throughout, his relentless galloping and foot-perfect jumping testing his more seasoned rivals, which included the previous two winners of the race, Lord Windermere and Bobs Worth. Still in control over the last fence, Coneygree drifted slightly to the right under Nico de Boinville as Djakadam and Road To Riches challenged him and each other up the steep run in, but his courage and stamina held out to deliver one of the most emotional Gold Cup victories in the race’s history.

“It’s the best feeling ever, unbelievable, I’m lost for words,” said de Boinville, who only losy his claim as a conditional a fortnight before the race. “It was a great plan (to go for the Gold Cup). They knew the weather gods were looking down on us – the rain came at the right time.”

He added: “Coneygree is so deceptive. Even when he is in tight, he is brilliant. It is all thanks to the Bradstock family, Alfie, who show jumps him and gets him to know where his feet are.

“It’s just unbelievable. It’s a great family effort and I must thank the owners – Lady Oaksey and the syndicate, and the Bradstock family – for keeping the faith in me. It’s still sinking in.”

Bred by the late Lord Oaksey, a hugely popular former amateur jockey, journalist, broadcaster and founder of the Injured Jockeys Fund, Coneygree is trained by his son-in-law and daughter Mark and Sara Bradstock in their Letcombe Bassett yard of just 10 horses.

Mark Bradstock, who also trains Coneygree’s Hennessy Gold Cup-winning half-brother Carruthers, said: “It’s wonderful. It won’t sink in for a while but it is great. We have done it before in smaller races and we will still keep doing it but it is obviously fantastic to do it on the big stage.

“The decision was very tricky because the forecast was so up and down. We were obviously liaising very closely with [clerk of the course] Simon Claisse, walking the course.

“Coneygree is a gorgeous, gorgeous horse and it is just so tragic that Sara’s dad wasn’t here. It’s all very well me standing here but the likes of my wife, who is not very well and rides him every single day, and the kids are involved. Chicky [Lady Oaksey] has been so wonderful and then the farriers and the vet. I could just carry on – it’s brilliant.”

“It’s because my father was the greatest. That’s where we’ve got this luck from; he deserved it and he’s looking down.” 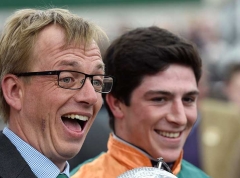 Up Next
Festival first for Greatrex and Sheehan