France has long enjoyed an advantage over its English and Irish neighbours when it comes to prize-money and premiums, and the sterling effort of the French Racing & Breeding Committee (FRBC) to encourage owners to buy in France has led to an increased vibrancy in the country’s sales market.

This has heralded the arrival of some major consignors to the ranks over the last decade, with the likes of the Coulonces Consignment and Ecurie des Monceaux swift to be recognised as dominant forces. Eager to join those names at the top table is the young operation La Motteraye, a portmanteau derived from the names of its two owners, Gwénaël Monneraye and Lucie Lamotte.

This August, the La Motteraye Consignment will feature for the sixth successive year at Arqana’s premier yearling sale, offering a draft of 20, followed by another five yearlings in the following day’s V2 Sale. Situated roughly an hour from Deauville in the serene Normandy hamlet of Les-Autels-Saint-Bazile, the 35-hectare farm has been home to the young couple, their characterful labrador Elliott, as well as boarding mares, foals and yearlings, since December 2009.

“We moved in just after the December Sale and the very first horse on the place turned out to be Leaupartie, who went on to be a Group winner,” recalls Monneraye, a 34-year-old native of Brittany.

“She was a foal then and she was sent to us by William Huntingdon and Liam Norris, and we sold her for them the following August to Sylvain Vidal. Sylvain has been a great support to us since then and we now consign horses for him too and still do business with William and Liam.”

Vidal, who manages the racing and breeding interests of Gérard Augustin-Normand, runs Haras de la Cauvinière, now a thriving stallion operation standing one of France’s flagship sires, Le Havre. Its proximity to La Motteraye has been a boon for the developing farm.

“We didn’t really know Sylvain but we went to La Cauvinière to see the farm, so we could see how they operated and get some ideas, and our relationship grew from there really,” explains Monneraye. 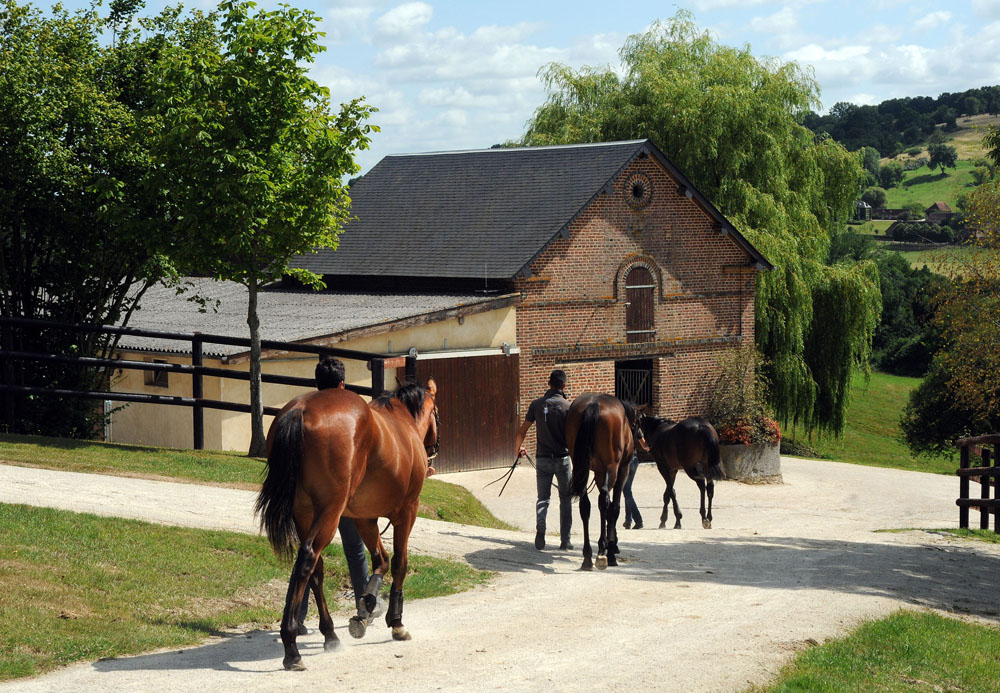 Cultivating contacts and gleaning ideas from the top operations around the world stood the pair in good stead when it came to setting up their own business after time spent in America, New Zealand, Ireland, England and Australia. The couple met ten years ago while working at Haras d’Etreham and Monneraye, who had already performed one global tour of duty, managed to persuade Lamotte to join him on another round of travels.

She says: “We spent a year in Kentucky working for Ben Berger at Woodstock Farm and also at Corduff Stud in Ireland. Everywhere we went we were learning. Neither of our families are in the horse business so we needed to learn and it was good to see how in each country they did things slightly differently.”

We are lucky enough to work with people who don’t put pressure on us, so we don’t feel stressed, and we certainly wouldn’t want to put that on the horses

Lamotte did however grow up close to the major French racing centre of Chantilly and spent her formative years involved in the trotting world.

“I wanted to be a jockey really but I knew that it would never work out,” she adds. “I decided I could get close to the thoroughbred world by learning about the breeding side.”

It’s hard to imagine a more restful scene than the bucolic setting of La Motteraye, with its half-timbered farmhouse and barns nestled into the lea of a hill. This tranquillity is surely absorbed by its equine residents. Even the yearlings, just a few weeks into their sales prep as we visit, wander in from the fields in a calm single file with manners belying their relative inexperience.

The ripple of contentment continues through to the humans at the helm. The foaling season has not long finished and there’s plenty to be done with 25 yearlings to be readied by mid-August, followed by further batches for Osarus in September and Arqana in October, not to mention the associated paperwork, but at La Motteraye calmness pervades.

Lamotte says: “We love what we do and we always aim to do the best we can for our clients. We are lucky enough to work with people who don’t put pressure on us, so we don’t feel stressed, and we certainly wouldn’t want to put that on the horses. I suppose for me, once the horses go into the parade ring at the sale then I get a bit nervous.”

The keenness for overseas breeders and pinhookers to be involved in the French market means that La Motteraye’s client base stretches from England, Ireland, Italy, Germany and Spain to as far as Australia.

Monneraye, who, like his partner, is a fluent English speaker, explains: “The stallion market has become really strong in France in the last few years but the biggest reason is the premiums on offer in France. When we first started I didn’t realise how much of a help that would be to us but it’s huge.

“We had mainly English and Irish clients when we first started but now we have close to 50% French clients for the sales. All our boarding and breeding clients are from abroad.”

The quietly spoken Lamotte is quick to add: “We never went after any clients – if the people want to come, they will come. Every year we have to prove we can do the job and we certainly don’t want to steal clients from other consignors.”

It’s a statement which might well sound disingenuous from some quarters in the competitive world of bloodstock, but from this genial duo it is highly believable. They have been happy to let the horses do the talking for them at the sales and so far they have been listened to. The aforementioned Leaupartie, graduate of their first draft of yearlings, won the Group 3 Prix de Psyche and was runner-up in the Group 2 Prix de la Nonette for Augustin-Normand and trainer Fabrice Chappet, and sold that same year was subsequent Group 3 Prix de Ris Orangis winner Abu Sidra. The following year’s consignment contained Group 3 runner-up Holy Dazzle – this time bought by rather than sold for Norris/Huntingdon.

Last September saw La Motteraye top a yearling sale for the first time when consigning a Le Havre filly for Sylvain Vidal at the Osarus September Sale. Her price tag of €130,000 was also notable as a first six-figure transaction for the sales company. The next ambition is to take star billing at Arqana August, though Monneraye is realistic about achieving this aim in the near future, stating: “You need to have the pedigree as well as the individual to do that and there’s big competition from farms like Monceaux. One day we hope to sell outside France, too. I’d really like to take a good draft to Tattersalls.”

This year’s August consignment does however contain plenty of desirable individuals. On paper at least, there’s certain to be plenty of interest in the Oasis Dream filly out of a winning half-sister to Classic hero and young sire Tin Horse (lot 136), while La Motteraye also consigns the sole yearling by Kodiac in the sale (lot 347), who is a half-brother to juvenile Listed winner Sushi Tuna and eligible for French premiums. 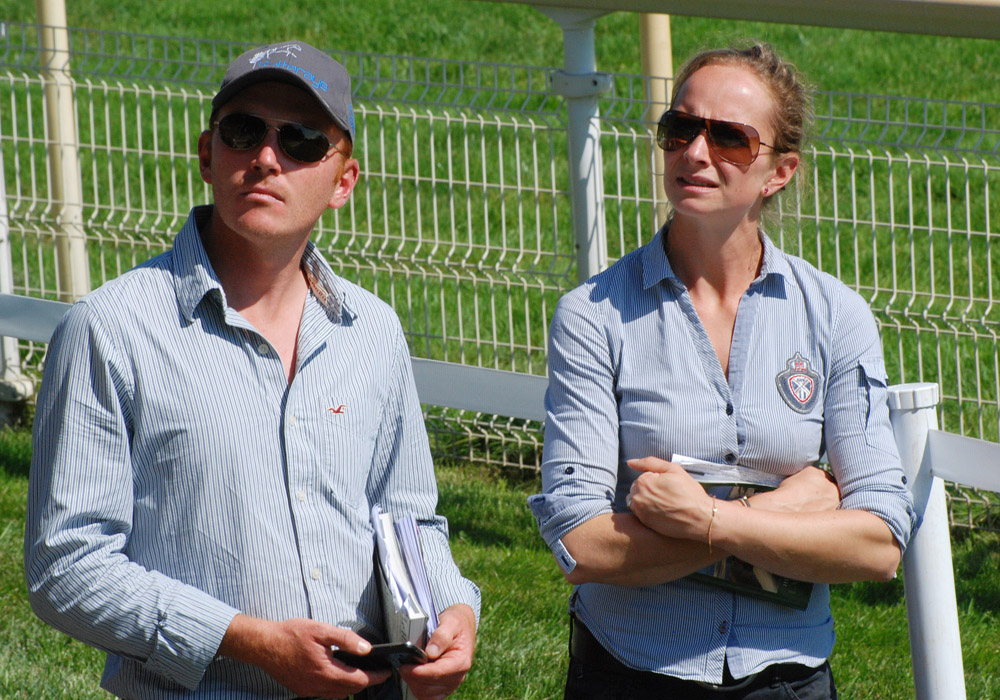 Colts by stallions of the calibre of Redoute’s Choice, Makfi, Lawman and this year’s leading freshman Zoffany are joined by two of the three first-crop Rajsaman yearlings in the sale, whose results will be of great importance to the breeder of one of them, Haras de la Cauvinière, which stands the young son of Linamix.

While all need to be ready at the same time to face the judges during the important mid-August sale, their preparatory work is undertaken on an individual basis at the farm.

Monneraye explains: “We do the prep over ten weeks, which seems like a long time but it goes by so quickly so it is really important to keep a close eye on each horse. Yes, we try to have a routine but at the same time, some will want to do more work, some will need less, for some you will have to adjust their feed, and so on.

“We look at each horse every day and make decisions for each of them as individuals.”
As well as the daily horse care, this year’s projects at the farm have included the installation of a smart new lungeing ring and German horse-walker, while the ongoing quest is for more land.

He adds: “We have access to 35 hectares and at the moment we are trying to buy 40 more, but this process can be a little slow in France!”

While the expansion of the farm may be taking its time, the reputation and growth of La Motteraye as a consigning operation has been anything but slow.

Monneraye says: “My father was a farmer and he works for himself so I always wanted to do the same. This is all we’ve ever wanted to do.”

He and Lamotte not only have their names entwined in business, but their passion and drive for their work is similarly shared. It’s a combination which is likely to ensure that the name La Motteraye will soon be seen beyond the borders of France. 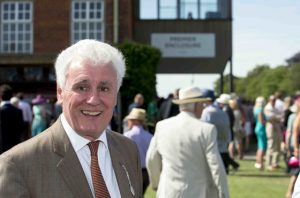 Up Next
Enchanted by glorious uncertainty