Colour Vision, who hails from the final crop of Juddmonte’s former flag-bearer Rainbow Quest, landed a fifth Ascot Gold Cup for Godolphin, overhauling the organisation’s other runner Opinion Poll by half a length.

Prior to Colour Vision’s victory in the Sagaro Stakes in May, Rainbow Quest had not been represented by a stakes winner since the success of Shimraan in the Group 2 Prix Eugene Adam in July 2010. One of most successful sires to stand in Britain in the modern era, he died in July 2007 at the age of 26 after covering a book of 45 mares, including Colour Vision’s dam, the German Group 3 winner Give Me Five, by Monsun.

Rainbow Quest’s best performers include his first-crop son Quest For Fame – who won the Derby in 1990, the same year that his paternal half-brother Saumarez won the Prix de l’Arc de Triomphe – Irish 2,000 Guineas hero Spectrum and dual Group 1 winner Croco Rouge. He also excelled as a broodmare sire, with Derby winners Kris Kin and North Light both being produced by his daughters, along with fellow Classic winners Footstepsinthesand, Look Here, Elusive Wave and Samitar, and the top-class colts Rakti, Ask and Powerscourt.

Foaled in France, Colour Vision was sold as a yearling at Tattersalls for 100,000gns to Mark Johnston, who trained him until the end of last season when he was switched to the stable of Saeed bin Suroor, for whom he has now won both his starts.

Godolphin has enjoyed a rich association with Ascot’s oldest race, winning the Gold Cup with Classic Cliche (1996), Kayf Tara (1998 and 2000) and Papineau (2004), while the organisation’s owner Sheikh Mohammed also won the race twice in his own colours with the Guy Harwood-trained Sadeem (1988 and 1989).

It was also a fifth Gold Cup for Godolphin’s senior jockey Frankie Dettori, who won twice on Drum Taps for Lord Huntingdon, followed by Kayf Tara’s first victory in the race and his most recent previous success aboard Papineau. 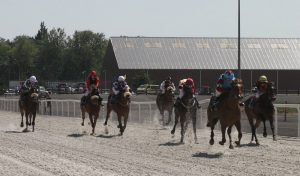 Up Next
Ostend reopens in Belgium