There are plenty of great grooms in racing, and Great Grooms the antique centre in Hungerford also has a connection with our sport, which comes to light following the Cambridgeshire win of Majestic Dawn.

For it was a chance encounter there – and the tremendous initiative of Oliver Cole – which lured Clive Norman back into racehorse ownership after a break of 35 years, with Majestic Dawn one of five horses he now owns outright or in partnerships.

“I have long been into fine art, paintings, bronzes, furniture and the like, and have been going to Great Grooms on and off for several years,” says Norman. “One day this chap came running out after me to ask if I was interested in horses.

“It turned out to be Oliver Cole, who invited me to the yard. They had a couple for sale; a colt by Canford Cliffs, who was named Black Medusa and I bought myself, and a colt by Red Jazz, who I bought under our company’s name and we called Towelrads Boy, who won well second time out at Wolverhampton.”

Majestic Dawn was bought at the Goffs UK Premier Yearling Sale, and is shared between Norman and Lee Green, who he met on one of his regular trips to Deauville, while last year Zhang Fei was purchased at the Arqana October Yearling Sale. The Camelot colt made his debut at Newmarket the day before Majestic Dawn won the Cambridgeshire and is owned in partnership, while another Camelot colt, Wantage, has yet to run.

The more recent purchases follow the floating of the Brickability Group – which includes two companies founded by Norman – on the AIM in August last year, which gave the company a market capitalisation of £150 million and made it the second highest market cap among AIM IPOs of 2019.

Norman remains a non-executive director on the Brickability board – and the group continues to do well, with the housing market relatively not too badly affected by Covid-19 – but his business interests are certainly only part of his lifestyle nowadays, with racehorses, fine wine and English military history books all competing for attention.

In addition to the four he owns or part-owns in training with Paul and Oliver Cole, he acquired the half-brother to talented two-year-old Method at the Goffs Orby Sale, and he too is now at Whatcombe.

It is, however, Majestic Dawn about whom Norman speaks most enthusiastically, and who has provided him and fellow owners Lee and Josephine Green with most magical moments.

“Part of the appeal for being an owner and about racing in general is that the smaller guys can occasionally beat the goliaths,” says Norman.

“When Majestic Dawn won his maiden at Newbury, the Queen was there I believe and she was second and fourth behind us. He won by six lengths that day – so even further than his winning margin in the Cambridgeshire [of four- and-three-quarter lengths] – and we’ve always seen him as a good horse, he’s just had one or two issues.

“Given he finished last at Kempton on his previous outing, the Cambridgeshire win was a surprise, but he does like Newmarket. The course suits him and it’s not dissimilar to the gallops at the Coles, which are incredible by the way.

“We live in Warfield, Berkshire, at the top of Hawthorn Hill, where there used to be a racecourse, and are about 40 minutes from Wantage. I probably get to the yard about once a month, but we get videos of the horses working, which is great and which I guess is an example of the more IT savvy nature of the younger generation Oliver is part of, plus plenty of phone calls.

“Paul is very laid-back and has been successful in the game for such a long time, especially with Generous of course. The Coles do a good job for us.

“It was amazingly exciting to get a winner in a race like the Cambridgeshire, and Paul had never won it before, so he was really pleased too. I think something like that is good for racing too, as I had a friend who got in touch after who’s now interested in buying a horse. Lots of friends called to say well done, and to win a prestigious handicap like that against the Maktoums and other big owners made me feel very lucky.”

He continues: “Majestic Dawn is a lovely horse, with a good temperament, he’s straightforward – doesn’t take any notice of dogs running around his legs like some horses do – and often breaks well, which is important as he likes to front-run.

“Paul made an excellent decision to fit blinkers for the first time at Newmarket, and it was great for Paul Hanagan, who gave him a brilliant ride and had suffered that bad injury in February. It was an emotional success for him, and I know he was very pleased to get the ride.

“They won in what I believe was a race-record time, and it was exciting for the whole family, my wife Julie and daughters.”

While Lee Green was at Newmarket to witness the triumph first-hand, Norman was not, and the ongoing absence of owners from the racecourse under restricted numbers, plus the total lack of race-going public, is a blow to someone who thoroughly enjoys the social side of ownership.

“I miss going racing, and all sport is just not the same at the moment – it needs crowds and has become robotic,” he says.

Norman was good enough to speak to Owner Breeder on his 71st birthday, and while he would normally have gone out for lunch, Covid-19 considerations – and the small matter of the Prix de l’Arc de Triomphe – meant he settled for a day at home.

Whether he went on to raise a glass to the retiring Enable and uncork one of his 8,000-9,000 bottles of wine is unknown. Norman has been a collector since the eighties and counts fellow wine club member Piers Morgan as a mate, though he has not quite managed to convince him to become an owner yet.

It was also unclear where and when Majestic Dawn would get another chance of being the subject of a toast, having gone up to a career-high mark of 105 after his Rowley Mile heroics. What is certain is that the Norman and Green families have much to look forward to – though they probably won’t be able to back him at 40-1 next time! 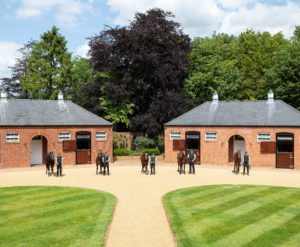