Even Top (left) just loses out to Mark Of Esteem in the 2,000 Guineas

A short-head separated Even Top from Classic glory in 1996 when he was narrowly touched off by Mark Of Esteem in the 2,000 Guineas. Placed in the previous season’s Racing Post Trophy and later the Lockinge Stakes at four, the son of Topanoora eventually retired to stud in Ireland before making his way to France.

During his time at Haras des Loges outside Orléans, by far the most notable performer Even Top sired is the admirably consistent Cirrus Des Aigles, who recorded his ninth stakes victory in total and third in a row on Sunday in the Group 2 Grand Prix de Deauville, in which he beat Silver Pond by ten lengths.

Now five, the Corinne Barande-Barbe-trained gelding has enjoyed his best season to date in 2011, winning the Prix Gontaut-Biron, Grand Prix de Vichy and La Coupe (all Group 3 events) and running the mighty mares Sarafina and Goldikova to a neck second in the Grand Prix de Saint-Cloud and Prix d’Ispahan respectively.

With a Group 2 victory to his name in each of the last three seasons, Cirrus Des Aigles, who is out of the unraced Septieme Ciel mare Taille De Guepe, has won 12 of his 36 starts, and been placed a further 19 times for the equivalent of £824,847 in prize-money. 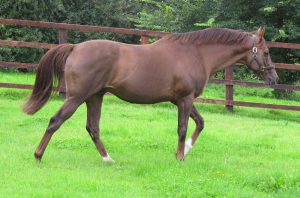 Up Next
Withyslade welcomes new arrival