The name Chicquita may not resonate in quite the same way for Europeans as it does for those in the southern hemisphere but the moniker given to the Irish Oaks winner by her Australian owner Paul Makin saddled the daughter of Montjeu with some lofty expectations. Happily she has not buckled under the weight of history.

Racing in the late 1940s and early 1950s, the original Chicquita was one of the greatest fillies in Australian turf history. Trained at Flemington by Tony Lopes, she won 16 races, including a clean sweep of the big fillies’ races over the Spring Carnival, following up her VATC Thousand Guineas victory by taking both the VRC Wakeful Stakes and VRC Oaks on her home track. The following season she finished second in both the Caulfield and Melbourne Cups.

Chicquita, the daughter of the imported Foxlaw stallion Blank, went on to became a great broodmare, her offspring including the 1964 Golden Slipper winner Eskimo Prince as well as 1962 Melbourne Cup runner-up Comicquita, and her legacy is evident still through last year’s Brisbane Cup winner Lights Of Heaven.

The modern-day Chicquita took a wayward path to Classic glory and lined up for the Irish Oaks as a maiden. Though not ideal credentials with which to tackle a Group 1 contest, she is at least in the hands of France’s pre-eminent trainer of fillies, Alain de Royer Dupre.

Chicquita raced only once at two, finishing third over nine furlongs at Longchamp last October. It was her three-year-old debut which was more memorable, however, for, with the Prix Lunadix seemingly at her mercy, she swerved to her right with 50 yards left to run and somersaulted through the hedge on the stands rail.

Remarkably, both she and jockey Antoine Hamelin emerged unscathed from the dramatic incident and they reunited to finish second to Treve in the Prix de Diane, with Chicquita this time opting to drift markedly to her left up the Chantilly straight.

With local expert Johnny Murtagh on board for her Irish Oaks challenge, Chicquita once again demonstrated her dislike for charting a straight course to the line but, despite another diagonal charge for home, she this time proved too good for her rivals, holding off the free-sweating Venus de Milo to win by half a length.

The winner hails from a family which is steeped in black type, which explains her €600,000 price tag when sold by Haras des Monceaux at Arqana’s August Yearling Sale to Badgers Bloodstock on Makin’s behalf.

Her Galileo half-sister made €1.1 million when sold at the same venue last year and the third foal from her dam Prudenzia (Dansili), another filly, will undoubtedly be one of the stars of this year’s August Sale – she is catalogued to sell in the opening session as lot 33.

Chicquita’s fourth dam is the Fittocks Stud foundation mare Souk, who died only last year. Her descendants include another Irish Oaks winner, Alexandrova, who also won the Oaks at Epsom. Souk’s Darshaan daughter Puce won a Listed race for Luca Cumani, who owns Fittocks with his wife Sara, and went on to produce Lancashire Oaks winner Pongee, dual Listed winner Lion Sands (by Chicquita’s sire Montjeu) and the Listed-placed Pukka. Puce’s daughter by Zafonic, named Platonic, won one race in France before being sold by the Cumanis for 100,000gns carrying her first foal, who would become the French Listed winner Prudenzia.

Like her daughter Chicquita, also a first foal, Prudenzia was bred in partnership by Lady Chryss O’Reilly and Lucien Urano under their Skymarc Farm and Ecurie des Monceaux banner. She has already rewarded their investment in her handsomely. 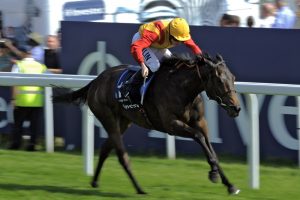 Up Next
Snow Fairy retires