Cheveley Park Stud celebrated a third winner of the Grade 1 Champion Bumper in as many years as jockey-of-the-moment Rachael Blackmore guided Sir Gerhard to victory from the front in Wednesday’s closing race at the Cheltenham Festival.

Since investing into the jumps sphere, the Newmarket-based operation has used the race as a springboard to launch the careers of stars Envoi Allen and Ferny Hollow, who won the 2019 and 2020 editions respectively.

Aiming to remain unbeaten, Sir Gerhard had been a perfect two from two under rules before being transferred from the care of Gordon Elliott to the master of Closutton Stables, Willie Mullins.

Blackmore opted to take no chances against Sir Gerhard’s new stablemate Kilcruit, who looked to be the six-year-old’s biggest rival, as she manoeuvred her mount to the head of the field as the early pace looked moderate.

Sensing the advantage she had built up turning for home, Blackmore asked her mount to quicken and he did so effortlessly. Kilcruit rallied to make rapid progress up the hill as he chased the leader, but Sir Gerhard was always doing enough to win by half a length.

It was Blackmore’s third Grade 1 success of the week having won the Champion Hurdle on Honeysuckle on Tuesday and earlier on Wednesday’s card guided the highly regarded Bob Olinger to victory in the Ballymore Novices’ Hurdle.

Mullins said: “He looks to be a natural. He has a huge, long stride. Rachael let him enjoy himself. He was lugging out and he was still a bit green, but he has a huge amount of natural ability.

“He is a fine, big, rangy individual that should be made for jumping fences at some stage.

“I have to say well done to the Cullentra team for preparing him and we were fortunate enough to get him. When he came, he was very fit and I just wanted to get him settled in and I was surprised how well he settled in and then maybe not to overdo things, as it is a lot of stress for horses to change stables and gallops. It was all about having the horse relaxed and having him fit enough, which he was.”

In Wednesday’s opening race, the Grade 1 Brown Advisory Novices’ Chase, Mullins had watched on as Monkfish somehow managed to land the 3m½f contest despite making an uncharacteristic error at the last.

Of his performance, Mullins added: “I think it’s the most nerve-wracking race I’ve ever watched – 1-4 on in a three-mile chase around Cheltenham is not great for the ticker, especially the way he jumped the last as he did.

“Chatting to Paul [Townend] he said he was idling on the first circuit as he was watching the jeep with the camera and the men at the hurdles and the fences, anything bar concentrate on his jumping. He was just idling and not concentrating.

“When he started racing beside Colin Tizzard’s horse [The Big Breakaway] things were better then. At least the loose horse stayed straight but it was very nerve-wracking for me. He quickened away though without a horse going with him.”

A memorable Cheltenham Festival for trainer Henry de Bromhead rolled on into Wednesday with a tenacious display from Put The Kettle On in the Betway Queen Mother Champion Chase.

Her victory also meant that for the second time in as many days, the afternoon’s championship race had fallen to a mare following the win of stablemate Honeysuckle in the Champion Hurdle.

While there was hardly a moment of doubt during Honeysuckle’s romp, it was a different story for Put The Kettle On, with much of the pre-race Champion Chase focus resting on the odds-on favourite Chacun Pour Soi, who was coming into the race off the back of a four-race winning streak.

There was drama before the race when last year’s defending champion Politologue was withdrawn at the last minute due to veterinary advice, prompting Harry Cobden to switch to Paul Nicholls’ other runner Greaneteen.

His defection left a field of nine runners and as expected, there was a good pace from the start as Rouge Vif and Put The Kettle On shared much of the early running. Chacun Pour Soi travelled well in the hands of Paul Townend just in behind the leaders and with Put On The Kettle starting to come under pressure in front, he seemed the most likely winner as they came down the hill. Meanwhile, it was getting messy in behind as Sceau Royal, looking for a run up the inner under Daryl Jacob, was brought to his knees as matters became tight.

Townend had Chacun Pour Soi poised to take it up as they turned into the home straight and indeed the gelding produced his customary turn of foot to hit the front two out.

However, Put The Kettle On was not to be denied and galvanised by Aidan Coleman, bravely clawed back the advantage to win by half a length from the fast finishing Nube Negra in second. Chacun Pour Soi held on for third. 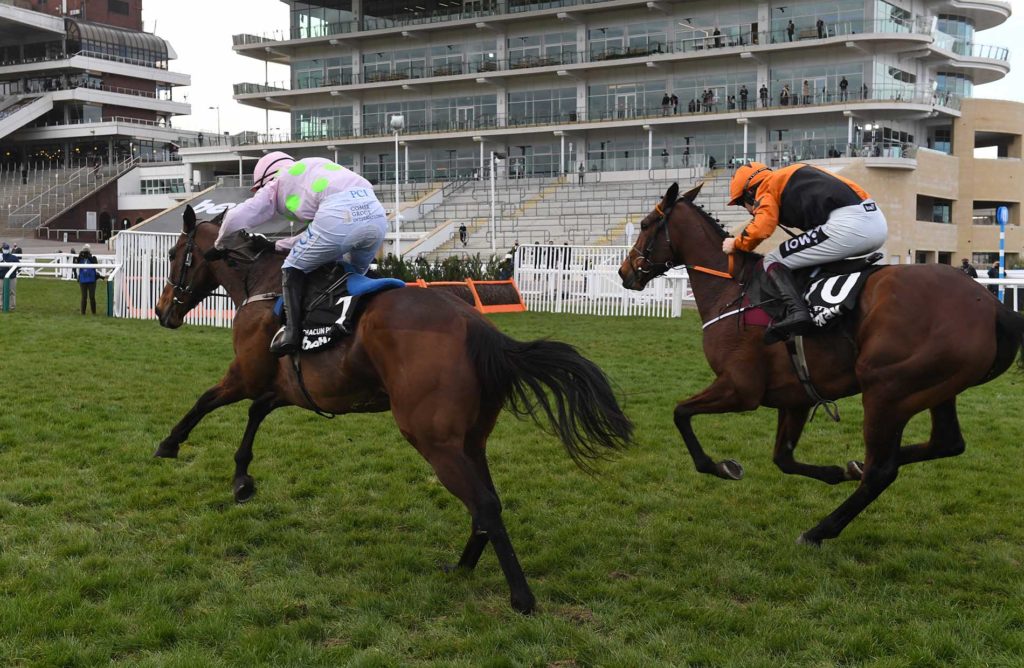 Put The Kettle On (right) races away from the last in the Queen Mother Champion Chase before getting the better of Chacun Pour Soi – Photo; George Selwyn

“The ride she gave me with her jumping was thrilling,” Coleman told Racing TV. “I knew Paul [Townend] was going well and thought he’d be winning. I was waiting for him and the others – but from being passed and then having the heart to come back, she’s some mare.”

Put The Kettle On had previously enjoyed her finest moment when successful at last year’s Festival in the Arkle Chase, showcasing an aptitude for the old course at Cheltenham that once again stood her in good stead on Wednesday.

“She’s the toughest mare I’ve ridden by far,” said Coleman. “I think she went above and beyond today, you can’t explain how hardy and tough she is. She throws in some magnificent leaps. She’s got a very high-level of ability, she jumps so well and then she tries so hard.”

There had been some discussion as to whether Put The Kettle On would take her chance in the new Mrs Paddy Power Mares’ Chase on Friday instead of the Champion Chase.

However, de Bromhead explained that option was never really on the cards.

“I just threw the mares chase into the hat back in February and we all agreed then to go to the Champion, especially as it’s on the course she loves,” de Bromhead told Racing TV. “It’s brilliant for the syndicate [One For Luck Racing Syndicate], hopefully they’re doing a bit of celebrating at home.

“I though Aidan was amazing on her, he just threw her at them and she came up every time – she winged the third last, second last and the last. She’s so tough, she loves a battle. She’s amazing.”

Put The Kettle On formed the second leg of a Grade 1 double on the day for the late Whytemount Stud stallion Stowaway following the odds-on success of Monkfish in the Brown Advisory Novices’ Chase. Bred by Butlersgrove Stud, she is a half-sister to the Listed-placed bumper performer Carningli and out of the winning Quest For Fame mare Name For Fame.

Two-time Grand National hero Tiger Roll returned to his very best with a demolition of last year’s conqueror Easysland to record a fifth win at the Festival in the Glenfarclas Cross Country Chase.

It was Tiger Roll’s third success in the event and the 11-year-old’s first win since landing the 2019 Grand National. His victory sees the diminutive horse become only the third equine star in the Festival’s history to win five times alongside the great Quevega and Golden Miller. 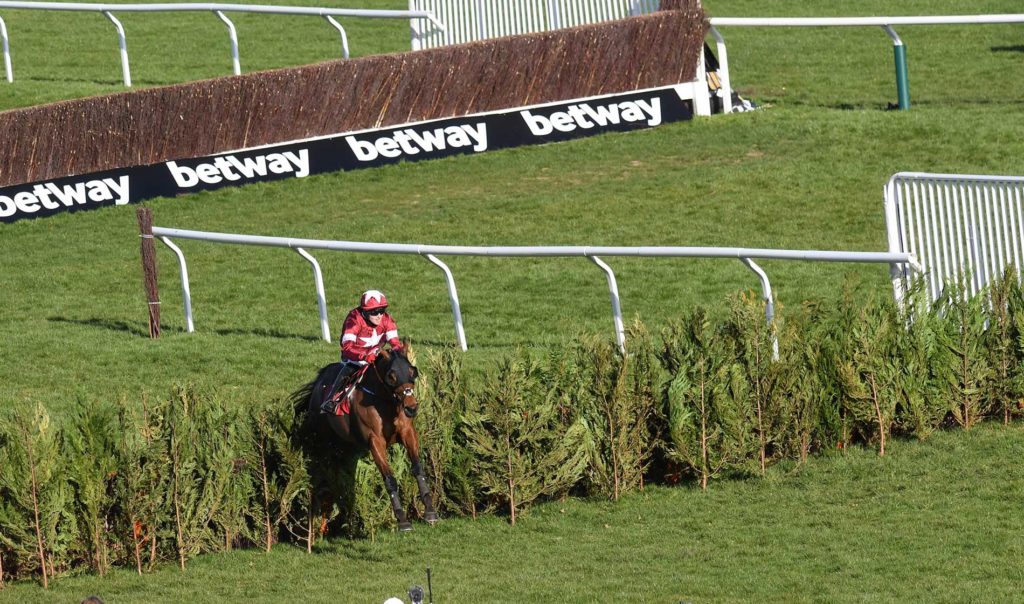 Gigginstown House Stud’s Racing Manager Eddie O’Leary told the Racing Post: “You couldn’t put into words what that means. What a legend. What a bloody legend. There is no end to him. You couldn’t retire him after that. I’m delighted for the whole team at Cullentra. It means the world to us all.

“There was a rush to retire this horse when he disappointed at Cheltenham back in November, but he had a smile on his face there today. The ground was the difference. At this stage in career, he knows what he likes and what he doesn’t like. That is his discipline.”

Condon and Hennessy in Heaven

A greyhound trainer by trade, Paul Hennessy only has three horses in training, and he was celebrating a first winner at the meeting when homebred Heaven Help Us took the spoils in the Coral Cup.

The 33-1 winner was partnered by Richie Condon, cousin of Davy Condon, who was also recording a maiden victory at the showpiece meeting.

The St Patrick’s Day action had been dominated by the Irish raiders for most of the day until the home team struck back when the Jonjo O’Neill-trained Sky Pirate held off the late challenge of Entoucas in the Grand Annual.

Sky Pirate’s success was even sweeter for jockey Nick Scholfield, who had missed much of the season after breaking his leg in three places when kicked by a loose horse after the winning post at Fontwell in November.

Scholfield said: “This is what it’s all about and I’m very grateful to Mr Tedham [owner] and Jonjo for giving me the opportunity. Other people have been winning on him, but they kept the faith.

“Although he’s still a novice, his jumping was electric, and we had a great run round the inside. The gap opened coming to the last and I thought, ‘I’m here a bit soon,’ but thankfully he kept pulling out more. He had every opportunity to die up the run-in and he’s just held on.” 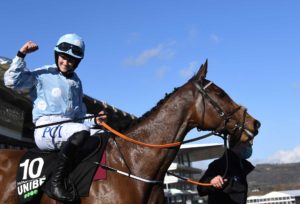