Changing of the guard

With Alflora now in retirement at the Hockenhulls’ Shade Oak Stud, the baton passes to newcomer Telescope

While watching the old warrior Alflora in his box at Shade Oak Stud the lyrics of Simon & Garfunkel’s song The Boxer come to mind.

‘In the clearing stands a boxer, and a fighter by his trade, and he carries the reminders, of every glove that laid . . .’ That particular verse ends ‘But the fighter still remains’.

Unquestionably proud and defiant against the passing of time, the 27-year-old pensioned stallion serves as a striking contrast to Telescope, Shade Oak Stud’s new recruit, who is full of youth and virility, but callow. “He’s a little unstable on his test mares,” stud manager Peter Hockenhull said during late January, ahead of the covering season.

If Gunner B was the stallion which put the Shropshire-based stud on the map, and Alflora was there to carry the baton as he aged, so Telescope arrives at a propitious time. “People don’t realise how perilous the situation is,” says Hockenhull. “You have a total mare population of some 800, of which Kayf Tara could take 150 to 200. Another 200 mare owners would like to stay with the local stud, leaving about 400 mares, and if Telescope takes 80 to 100 we’re down to 300. I have to service a massive investment which I’ve gone into to buy this horse, and there’s not a lot to target.”

Telescope, a son of Galileo out of a Darshaan half-sister to Dubai World Cup winner Moon Ballad, was a Group 2 winner and Group 1-placed for Sir Michael Stoute, and has generated a raft of interest and some absorbing bookings. He stands alongside the exquisitely bred Black Sam Bellamy – a brother to Galileo and half-brother to Sea The Stars – the St Leger winner Lucarno, and Fair Mix, whose flag has been carried to great heights by Simonsig.

Telescope took two strides out of his box and I was knocked out. You short-list a stallion by pedigree and race record, but they need a bit of wow factor

When asked about the process that led to Telescope’s purchase from Highclere Thoroughbred Racing, Hockenhull pauses, then says: “I don’t quite believe we managed to do it – I will add that we were short-listed for Brown Panther. Michael Owen visited and all seemed well, but tragically the horse broke a leg a week later. I had already been contacted by Bryan Mayoh, my friend and partner in Telescope, who had said ‘go and see him’. I said ‘we’ve got no chance,’ although my ‘no chances’ in the past have turned out to be lucky. I felt the same about Black Sam Bellamy, who was destined to go to Scarvagh House, but I still went to see him. When Scarvagh closed, and because I was the only other person who had been to see the horse, we got him. If you don’t do things, nothing happens. 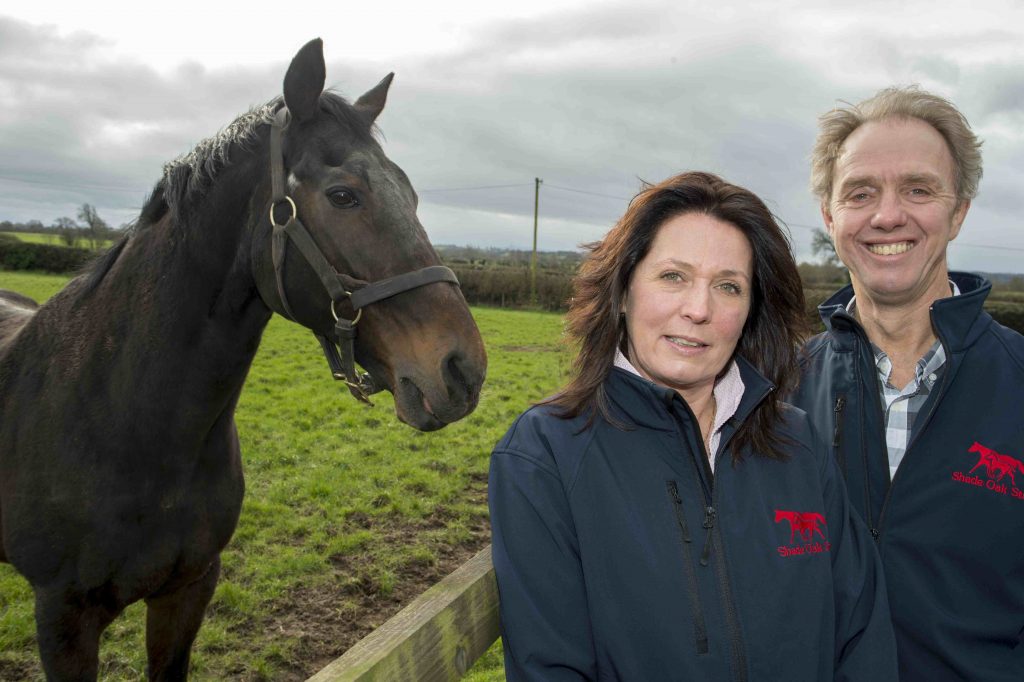 “Telescope took two strides out of his box and I was knocked out. You short-list a stallion by pedigree and race record, but they need a bit of wow factor. I wanted a horse to bring me out-and-out quality.

“I said to John Warren, ‘I’ve got no chance, I run a British National Hunt stallion stud, but should I put a bid in?’ I was thinking, ‘Kayf Tara cannot last forever, there aren’t that many other stallions in this country, this is a chance, now!’ John said, ‘Give us your best bid,’ so we did, and he didn’t throw it out, but said, ‘It’s not quite enough.’ So we negotiated, and John was encouraging, saying ‘Go one more, go one more,’ until a deal was done. The horse had put his Highclere syndicate members in the winners’ enclosure at Royal Ascot – they owed him a good home.

“It’s ironic to think that had he won the King George [VI & Queen Elizabeth Stakes], instead of finishing second, he might have followed their other winner of the race, Harbinger, to Japan.”

At DBS’s January Sale stallion parade, Telescope made his first public appearance from Shade Oak, and Hockehull says: “I’ve never had a response like it. He stepped off the lorry and within 30 seconds of reaching his box the first person arrived to see him. He must have carried out 50 shows.”

By the end of January, Telescope’s book included 26 members of the TBA National Hunt Elite Mares’ Scheme. Hockenhull adds: “It’s a credit to the scheme that elite mares are being covered in this country, which is helping to support the next generation of jumps sires.” 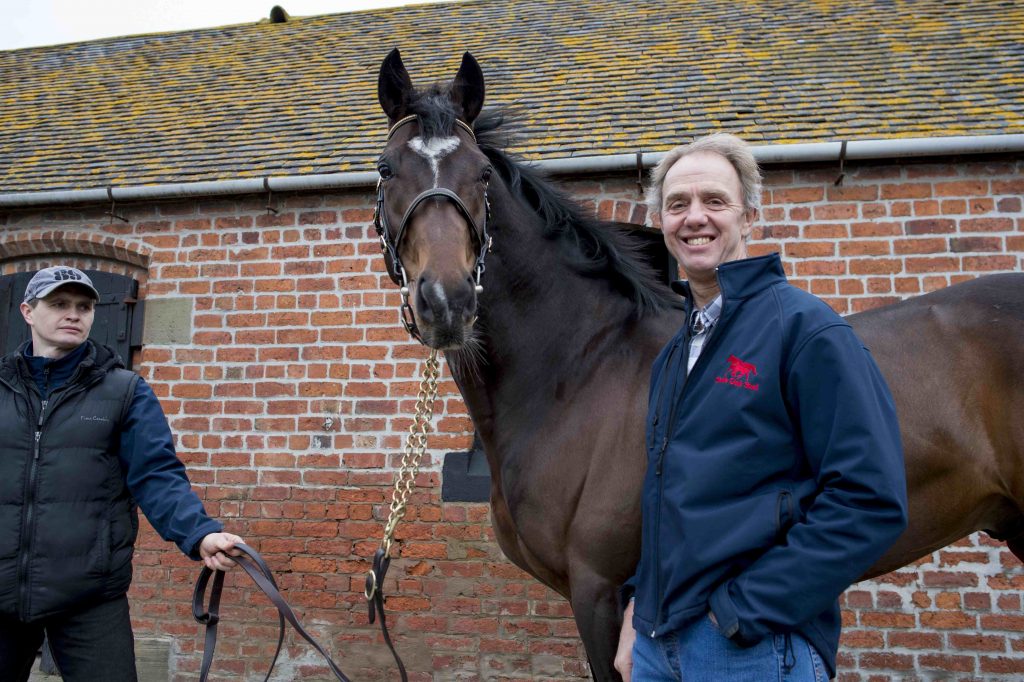 Could Telescope bring in mares from Ireland and France? “I’ve got one booked from Italy,” says Hockenhull brightly. “That’s the furthest a mare will have travelled to this stud – I do offer a travel allowance and I have had enquiries from Ireland. Irish purchasers who buy a mare over here will sometimes have her covered by a British stallion before sending her home. It’s nice to get Irish mares because it helps to have progeny dropped in Ireland.

I don’t think we’ll ever see another Midnight Legend – he did not have the mares, he covered minuscule books, but somehow he managed to get racehorses

“Getting a stallion is easy – people are prepared to give you them. Getting the right stallion is very hard, one that generates enthusiasm and a decent book of mares, which means you have a good crop of foals, which attracts more mares. It’s a spiral that can go one way or the other.

“I don’t think we’ll ever see another Midnight Legend – he did not have the mares, he covered minuscule books, but somehow he managed to get racehorses. He is a lottery ticket – there is no other way of working it out. If you look at the model of the larger Irish studs, they cover huge numbers of mares, and if you throw enough darts you will get one or two to stick. Are their elite stallions so much better than the rest, are the worst so inferior? There’s not a lot in it, and while there are freaks like Midnight Legend, it generally comes down to the mares covered.”

Hockenhull is unequivocal in saying, “I love National Hunt racing,” but admits, “My son, Sam, who is 20 and studying at Bristol University, probably loves it more than me, but I’m not encouraging him to come back to the stud. It’s a great way of life and I enjoy getting up in the morning, but it’s in a fragile way. If he said ‘I want to come back,’ I would support him, but there are many other avenues in racing and I would urge him to explore those. With Telescope the stud is on a good footing for the next ten to 15 years, but we’ll see.

“I reaped my father’s hard work and I was very fortuitous that at the time I came back here it was suddenly going forward after he had put in 15 to 20 years of hard graft. It had taken him a long time to get established and make contacts with breeders.” 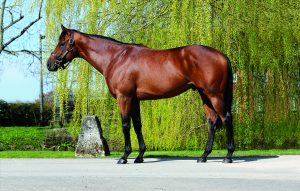 Up Next
Tweenhills standing a different type