Stage Star lived up to his name in style on Wednesday with a commanding performance to take the Grade 1 Challow Novices’ Hurdle at Newbury.

Sent off the 5/4 favourite following two facile novice hurdle successes, Stage Star took it up approaching the penultimate flight and strode clear for a near seven-length victory from West Balboa. In the process, he handed trainer Paul Nicholls a record-equalling fourth Challow victory and his second consecutive win in the race following that of Bravemansgame a year go.

“My personal opinion on the horse is that I got it all wrong,” jockey Harry Cobden told ITV Racing. “I thought he was slower and a stayer but I got there way too soon. I’ve travelled smoothly and when I got down lower in the saddle he took off.

“He’s improved and impressed us more every time he runs. He has loads of ability and a great mind, he’s very easy to ride and very easy to do at home. He wouldn’t be a million miles away from the horse that Bravemansgame was a season ago.”

Now the winner of three races, Stage Star was bred in Ireland by Ruxley Holdings and hails from the third crop of the late Coolmore stallion Fame And Glory. His dam, fellow Ruxley Holdings homebred Sparky May, was a classy four-time winner who enjoyed her finest moment when successful in the 2011 Grade 2 Warfield Mares’ Hurdle at Ascot. Stage Star is her third foal.

Over at Leopardstown, Sharjah joined Istabraq and Hurricane Fly as a four-time winner of the Grade 1 Matheson Hurdle when coming out on top over Zanahiyr for Willie Mullins in a thrilling finish.

Partnered by regular pilot Paddy Mullins, Sharjah made stealthy headway from the rear of the field to assume closer order as the field swung into the straight. With the final flight omitted due to low sun, Zanahiyr made the best of his way home but Sharjah was travelling well on the outside and although Mullins had to get serious with his mount as Zanahiyr rallied, Sharjah got the upper hand when it mattered to cross the line a neck to the good of his rival.

“A lot went wrong,” Paddy Mullins told Racing TV. “I moved forward as I didn’t want to give Saint Roi too much rope, And then at the third last, Jack [Kennedy, riding Zanahiyr] shouted out to Davy [Russell, riding Petit Mouchoir] to give him a bit of room, so Davy moved out and Jack went through the gap. I’ve gone through to follow him but so has Paul Townend [riding Echoes In Rain] on the inside. So I’ve gone back a length.

“And of course the last hurdle being out was a big negative for us as we’ve come off the nice, good ground on to yesterday’s ground, which is slower, and you could feel that he wasn’t getting the same traction on it. Jack Kennedy cleverly allowed us not to get back on to the nice ground, so he’s won despite a lot of things going wrong.

“He’s only eight and to be mentioned in the same breath as legends Hurricane Fly and Istabraq is very, very cool. I can’t see why he can’t come back and do it again next year.”

Sporting first-time cheekpieces, the Stowaway gelding travelled smoothly into contention under Jack Kennedy turning out of the back straight and only had to be pushed out to score by eight lengths.

Run Wild Fred, who had cut out much of the running with a flamboyant round of jumping, stayed on gallantly to finish second, ten lengths ahead of Vanillier in third.

It was a deserved first Grade 1 victory for Fury Road, a dual Grade 2 winner over hurdles who was beaten only a neck by Monkfish in the 2020 Albert Bartlett Novices’ Hurdle. 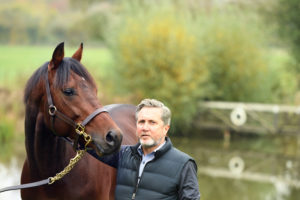 Up Next
Simon Davies' burning ambition at Chapel Stud