Challow falls the way of Obeaux

A son of the late Saddler Maker, Messire Des Obeaux travelled strongly in behind the leaders under Daryl Jacob, the field taken along by outsider Major Mac at a good pace.

The leader swung into the straight for the last time with a healthy six-length lead. Robin Roe, the strongly supported favourite, fell heavily at the third last when held up under Harry Skelton.

Messire Des Obeaux travelled strongly in the slipstream of the leader and hit the front just after two out.

With Irish challenger Baltazar D’Allier trying to challenge after the last, Alan King’s charge fended him off to score by two lengths.

“He’s a nice type and is getting better all the time,” reflected Jacob. “He’s a good, strong traveller and that’s exactly what you need for a Cheltenham horse. We’ve plenty of of exciting horses, but he’s doing very well.”

Having taken the Grade 2 Winter Novices’ Hurdle at Sandown last time out, Messire Des Obeaux becomes only the third four-year-old in 23 years to claim the two-mile-and-a-half prize.

His handler enjoys another Grade 1 win hot the heels of Yanworth’s success in the Christmas Hurdle on Boxing Day.

King said: “Last time was the first time he had to battle and I’m sure they learn from that. He has improved a lot for it. I was delighted with him today. It seemed an awful long way from the last, but he held on.

“I felt it was one of the best Challow Hurdles we’ve seen for some time. I was hopeful he’d run well, but I certainly wasn’t confident he’d win. I’ve said all year I can’t wait to see him over fences next season, but he is not doing too badly over hurdles. He might well go to Cheltenham at the end of January for trials day.” 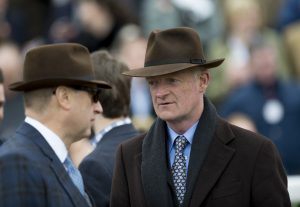 Up Next
Festive 22 for Mullins