Salomina yet another star filly for Lomitas
Stories

Carnegie, who beat Hernando by a neck in the 1994 Prix de l’Arc de Triomphe, has died at Darley’s Kelvinside Stud in New South Wales at the age of 21.

Trained in France by Andre Fabre for Sheikh Mohammed, Carnegie was bred by Robert Sangster’s Swettenham Stud. From the sixth crop of multiple champion sire Sadler’s Wells, his dam Detroit was one of two broodmares to have produced an Arc winner having won the race herself, the other being Urban Sea, dam of Sea The Stars.

Carnegie did not race at two but made a winning debut in March of this three-year-old season in the ten-furlong Prix Dardo at Saint-Cloud. His subsequent 12 starts were made solely in stakes company, with victories in the Prix Eugene Adam and Prix Niel leading up to his most famous success at Longchamp on October 2, 1994. He stayed in training at four, adding the Grand Prix de Saint-Cloud and Prix Foy to his list of seven victories, but could manage only sixth in that year’s Arc behind Lammtarra.

Initially retired to stud for Darley in Japan, Carnegie also spent several seasons shuttling to New Zealand where he sired VRC Derby winner Amalfi and Carnegie Express, winner of the Rosehill Guineas. In 2001 he was transferred to Darley’s farm at Aberdeen in Australia’s Hunter Valley and remained on stud duty there until his retirement in 2008.

Among Carnegie’s other notable progeny are the multiple Group 1 winners Vision And Power, Perlin and Tuesday Joy. He is the broodmare sire of this year’s South Australian Derby winner Zabeelionaire and of Caulfield Guineas winner Whobegotyou.

Darley’s Australian Managing Director Henry Plumptre, Darley’s managing said: “Carnegie was a magnificent racehorse who won the most cherished prize in European racing and he went on to have a distinguished career at stud. Everyone at Darley will remember him fondly as he had a wonderful temperament and was such a pleasant horse to be around.” 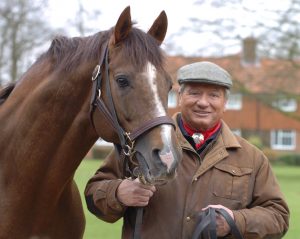 Up Next
Salomina yet another star filly for Lomitas